Last year I did an extensive analysis of the 2007 world market statistics I had in hand for 2007 and the couple previous years. There was lots of numbers in arcane lists... Today, welcome the graphic technology (thanks to Google spreadsheets)! Cahiers publishes an atlas in a special issue, every year since 2004, but since they sold out to Phaidon, this year the atlas has been split in 2 halves and folded inside 2 consecutive issues (May, June 2009) and not bilingual this year unfortunately. Anyway their survey is not consistent, so I have to fill the blanks with other sources. And they don't compile the data to compare the relative positions with other nations, or with other contextual statistics. The profiles they give for individual countries just give numbers that don't make sense if we don't know what range of numbers to expect for such or such country. 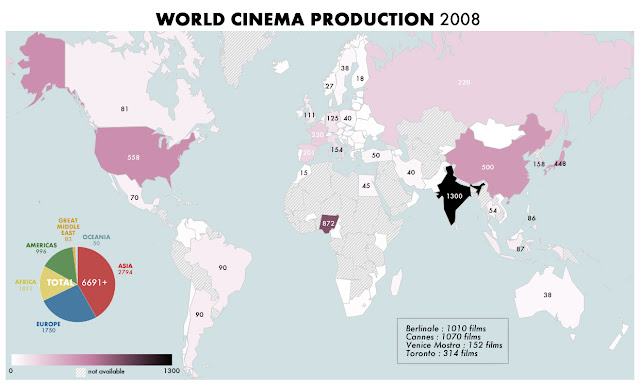 Note: successive enlargements of the European Union :
These are the cinema industries that produce the largest numbers of theatrical movies in the world. We can easily see the disparity between them, and we need to compare them to the size of their population, movie going audience/admissions sold, GDP, and more generally to the film industry/infrastructure/screens available to distribute so much films.
The (arbitrary) psychological threshold here is 365, corresponding to the ability of an industry to put forth 1 new film per day of the year, meaning 7 new local films in each weekly batch of the year! But of course, for these mega-industries the market is split in many non-competitive sub-markets, either in different languages (like India, Europe and China), or in various channels of distributions (multiplexes in main cities, art houses circuit, TV, direct-to-video, VOD, foreign market, black market...). In the USA for instance, they don't distribute on the commercial circuit (for mainstream audience) as many movies as they make, some of them are shelved/postponed or reserved for a limited market.
The European Union data is only indicative (to compare the USA to a market similar in size), since it compiles the numbers from other countries on this graph. And its upward curve is more due to the expansion of the members of the union (15 member-states in 1995, 25 in 2004 and 27 since 2007), than to the progression of individual industries (which are relatively stable as seen at the bottom of the graph).
Note the so called Hollywood "slump" initiated in 2005 (not that dramatic in relation to this span of more than 1 decade), which was aggravated by the Writers' strike of 2008. But they still make more movies than they can digest! [EDIT: actually in 2008, the number of films produced goes below the number of films distributed for the first time in at least a decade]
Now if we compare to India, their boom is properly scary (2 ½ more movies than Hollywood in 2008!). Especially since China should be ranked number 1 (though it's hard to find reliable extensive numbers for the Chinese market). With an average of 25 new movies per week, it's understandable why there is no room for foreign movies in India. But if we look in details, not every single Bollywood film made should be made. they just make movies in a row, on a mindless assembly line, because the Bollywood economy allows it, and that the extremely movie-going audience is supporting them. But this extravagant raise should stop after the exhibitors strike in Bollywood at the beginning of 2009. Until now, Bollywood doesn't seem to hurt as much as Hollywood (!) from the piracy competition and the online offers.
Japan is still the leader of the non-mega-sized countries in the world, and seems to have reached a plateau around 400 films/year since 2006.
The European countries at the bottom show a relatively stable evolution, except for Germany that enjoys a recent notable surge.

I've split these countries in 2 separate graphs for readability of the bottom part, too dense in the top graph. Here the (arbitrary) psychological threshold is 52, corresponding to the ability of an industry to put forth 1 new domestic film every week of the year, on average. Below this threshold, it is impossible to propose to the audience at least 1 local movie amongst the weekly batch of titles distributed every week, in case the local culture matters.
It's difficult to find comprehensive statistics for lesser known countries. This selection only represent the ones which had data from 2004 to 2008, all countries below France. Though notable missing countries with a large production (ranging 90-40) : Bangladesh, Canada, The Philippines, Switzerland, Sweden, Egypt, Austria, Netherlands, Taiwan, Belgium.
The UK seems to be the only European country closely tied to the Hollywood "slump". The others are rather on the raise, especially Germany and Italy which show a remarkable boom.
The Cannes Palme d'Or for Romania in 2007 didn't affect the local artists and producers yet... Though 3 more Romanian films were present in Cannes this year.
The numbers for Iran are quite inconsistent. I wonder if it reflects the instability of the industry (or of the censorship board) or if the survey is just random and unreliable...
We'll look at these countries individually, when compared to their respective population size and ticket sales, in my next posts.


Why looking at the health of foreign markets matter to cinephiles? Because if the movie industry depends on local conjunctures, the production of new films in every corners of the world are important to global film culture as a whole. It's only a competition from the producers' perspective! But viewers don't look at it as a territorial battle where we should should only support our local production. Real cinephiles love foreign movies as much because cinema is a universal language, the language of art, the language of emotions. Local stars, local plot lines, local issues, local language are only marginally significant when what we love is the expression of cinema. So it is meaningful to learn about how other countries fare and how they cope with the recession and survive, the countries that host our favourite auteurs.

More graph of countries with data from 1985 to 2008. The dashed line for India is only approximation from decade average. If you can find more precise data, please let me know, so I can complete this chart.
Download here
EDIT : I updated the EU curve too.