On the French website of the Caen Ciné-Club, there is a great synopsis of the taxonomy developped by Gilles Deleuze in L'image-Mouvement (1983) / L'Image-Temps (1985).
Notably the analogy between the aesthetic schools of Cinema and Plastic Arts. The list order follows the chronology of cinema movements. Thus, the matching Art movements don't fall in their own chronological timeline.

It looks like "The Cristals of Time" is the category that corresponds best to the trend we considered as "Contemplative Cinema" at the Unspoken Cinema blogathon in January. And I'm reading this book at the moment and will return to the trend of contemplation in cinema, and continue to contribute to our collective blog.

CLASSIC CINEMA
MODERN CINEMA
In an earlier post I had posted a correspondance between History of Arts and Psychiatry.
Publié par HarryTuttle @ mardi, février 27, 2007 2 commentaires: 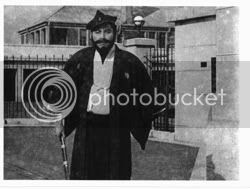 Kiichi is a Kendo champion, brave and honest, with a childish and asocial behavior, lives alone in a dirty appartment. His beard and repaired clothes ridiculize him in society. Ozu portrays here a stereotypical world opposing the ancient regime incarnated by the martial art tradition, kimono and facial hair, to the modern Japan of the westernized fashion, suits, office work. We can sense the inspiration of Chaplin humor in this negligent tramp causing etiquette troubles in public because he doesn't fit in.
The film opens at a Kendo tournament showing Kiichi hidden under his Kendo helmet, delaying the revelation of the face of the popular actor, Okada Tokihiko, and his notorious beard. During his domination of all opponents, only body language conveys the visual gags. His purely physical performance already identifies a peculiar personality, like Mifune Toshiro with his famous shoulder shake. It's an interesting establishing scene for a silent movie, where the audience cannot identify to the voice nor the face of the lead actor. And we have to contemplate the spectacle of this choreography of lookalike "puppets" battling together until we understand who is who.
In the street his confident saber skills help him to rescue a lone woman racketed by a street gang, conducted by a female thug. Invited at the fancy birthday party of an aristocrat heiress he scares away all the girls but leaves a strong impression with his traditional dance. Once convinced to shave his antic beard to become a modern gentleman, women will fall for him and he'll be embarassed by marriage proposals. The coincidence of three women from different social classes running after him creates a series of humorous misunderstandings. From unpleasant and clumsy he tries hard to seduce his chosen sweetheart.
Pure entertainment routine (one of the last ones) from Ozu's early period. The visual running gags are quite funny and staged with originality. Very amusing. There is an exterior travelling with the camera looking into a spherical chrome headlight of a driving car, which reflects the city streets, deformed. A shot Ozu used in other early films as well.
(s) 0 (w) + (m) ++ (i) ++ (c) +
Publié par HarryTuttle @ lundi, février 26, 2007 1 commentaire:

I'm a contrarian all year round on this blog, thus for the fun of participating in Jim Emerson's Contrarianism blogathon at Scanners, I'll make it an exercice de style. Following up on Andy Horbal's initiative to study the buzz generated by Manohla Dargis NYT review of INLAND EMPIRE, I've decided to take the aggressive detractor approach and give a detailed reader's feedback.
This is a gameplay of course, as Dargis is a great critic and my tentative analysis is pretentious. Nitpicky mode intentionally exaggerated. For the fun of being contrarian, at least let's not bash a little helpless reviewer, let's go for the best and see where it takes us. Why not? Keep in mind I'm not familiar with american TV culture and English is a second language, this should relativize my following remarks, but what any reader gets from a review says something about the writer. Moreover I happen to share Dargis opinion that INLAND EMPIRE is a masterpiece, and I have nothing but respect for her critiques.

I've read this article back in December and only saw the film last week. I had already a few objections back then when it was celebrated "the most significant piece of criticism she wrote for the NYT". Now reading it again, with hindsight of seeing the film, I'm able to qualify my troubled impressions.

Dargis calls it "art", ranks it in her top10 of the year, people call her review her best job ever... Then I'd like to know what is an art review and how good can get criticism with great literary style.
I'm not siding with John Podhoretz and Andrew Sullivan who called her "pretentious" and "poser", on the contrary, I think she is too superficial and dilutes the density of Lynch works in a populist rhetoric meant to vulgarize "art", which obviously goes against her stated intention to place this movie above all.
Where is the critical reflexion about Lynch's world vision? Where is the aesthetic analysis other than qualifying actors and set furniture with colorful adjectives, and dropping as much pop culture references as possible? I don't know what was the bottom line for this review, and maybe the editor watered it down afterall.

paragraph 8 : The only reflexive analytical paragraph so far.

"How Nikki and the other characters wind up in these rooms — how, for instance, the pampered blonde ends up talking trash in a spooky, B-movie office — is less important than what happens inside these spaces. In “Inland Empire,” the classic hero’s journey has been supplanted by a series of jarringly discordant scenes, situations and setups that reflect one another much like the repeating images in
the splintered hall of mirrors at the end of Orson Welles’s “Lady From Shanghai.” The spaces in “Inland Empire” function as way stations, holding pens, states of minds (Nikki’s, Susan’s, Mr. Lynch’s), sites of revelation and negotiation, of violence and intimacy. They are cinematic spaces in which images flower and fester, and stories are born."

paragraph 9 : 2nd insight of the review.

"Each new space also serves as a stage on which dramatic entrances and exits are continually being made. The theatricality of these entrances and exits underscores the mounting tension and frustrates any sense that the film is unfolding with the usual linear logic. Like characters rushing in and out of the same hallway doors in a slapstick comedy, Nikki/Susan keeps changing position, yet, for long stretches, doesn’t seem as if she were going anywhere new. For the most part, this strategy works (if nothing else, it’s truer to everyday life than most films), even if there are about 20 minutes in this admirably ambitious 179-minute film that feel superfluous. “Inland Empire” has the power of nightmares and at times the more prosaic letdown of self-indulgence."

paragraph 10 : banalities about Lynch and subconscious. Nod to photography

I don't see how this particular review is any different from any other one. It doesn't strike me as such a writing mastery (I'm French, I wouldn't know), nor does it feature the greatest filmic insights we've read in a long time. As for the film, I'd wonder if she liked it if she didn't call it art and put it in her year-end top. Lots of nitpicky notes, seemingly off-the-cuff, on details of minor importance and few demonstrations of the greatness of the film. From the review alone I would say she liked it but will move on quickly to the less artsy fare. These words don't shine with passion and adoration as we could expect it from a glorified art piece. But maybe Dargis just doesn't like art that much... ;)

For the 3rd time the Directors Lounge (8 - 18 february 2007) offers a place to showcase experimental videoartists from around the world, in the margin of the Berlin International Festival. Video installation, exhibitions, slideshow, animation, conference.

Organized by Marina Foxley (among others), don't miss her beautiful short films called Still Life, Errance and Scrap Metal (can be viewed online here and here with some of the other works).

Follow the news on the official program and the blog.