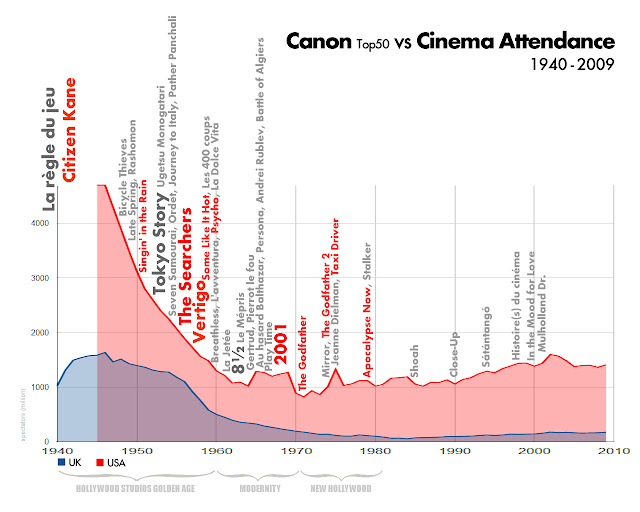 Without data on USA attendance prior to 1946, we'll just focus on post-1939 canon titles. The mid-forties were the all-time peak in theatre attendance for both the USA and the UK. The drop (mainly due to the TV competition) is quite dramatic ever after. And you can notice that the post-1939 titles in the S&S Top50 are very dense in the 50ies and more generally earlier than the mid-60ies. The canon is a lot more picky for the next 50 years!!!
Does it mean the canon is right, thus cinema was actually greater in the 1950ies and 60ies? Or is the canon really conservative, nostalgic and slow to adapt, thus ignoring newer masterpieces for more than 20 years after their releases?

What about the myth of Hollywood's supremacy?

The heydays of Classical Hollywood, or Golden Age, was THE greatest period of cinema history back in the  50ies, because sound cinema had reached true mastery of the medium in the Hollywood Studios, and they also greatly benefited from the emigration of many great European masters (notably the jewish filmmakers refugees before and during the Second World War, persecuted in the German territories; see Hollywood émigrés). There was a perfect convergence of talent, technique, equipment, infrastructure and budgets like nowhere else in the world. Until 1960, Classical Hollywood (in red) was THE referential standard worldwide (especially thanks to the re-appraisal by French criticism, which American critics rather forget), therefore had a rightful shot at stealing and monopolizing most places on a canon Top10 back then, if they disputed the privilege to the masters of the late Silent era (who equally deserved the crowning title, if not more for some of them). And this was possible because some of the non-English films (Ozu or Satyajit Ray for example) you see in this period on the above graph (in grey), were not acknowledged (or even released at all) in the UK-USA at that time.
The difference of conservative degrees for an English-centric canon is that Hollywood or British films are canonised immediately or within 10 years (the close influences by importation like Germany, France or Italy also get this advantage to some extent), but for Japan, India they have to wait decades. A stricter conservative bias for non-Euro-American cinema.

So in hindsight, we can see today, that the Hollywood-made masterpieces (in red on the graph) aren't as dominant as the American patriots would like us to believe... Even in the 50ies, when they should reign supreme, the red is matched by the grey, if not outnumbered! The last "studio-movie" in the canon (not just from the Golden Age limited period) is Psycho in 1960, the last American-made movie is Apocalypse Now in 1979 (and not even a studio movie, more like an independent film from the New Hollywood secession! like The Godfather 1 & 2 and Taxi Driver). So the last genre-movie coming from the USA in the Top50 is The Godfather 2, which came out nearly 40 years ago! And it's a canon voted by American and British critics!!! How great is recent Hollywood genre again? That's what a canon is for (when done properly), to hold current production up to the highest standards in history, and adjust your own over-praise accordingly.

So where is that supremacy of Classical Hollywood, or American indies, or Hollywood genre??? Even when the Commonwealth votes, the non-English masterpieces (mostly artfilms) dominate, either from Europe or Asia. So now that the (conservative) canon has came to term with this 1950ies mascarade, it's about time that critics start to absorb this fact too, in their weekly writings, and stop deluding themselves in thinking that Hollywood has any exclusive stronghold on canonical laurels or auteurism credits. Citizen Kane is the tree hiding the forest, or the lack thereof... The number 1 title is the only thing remembered by the public opinion, and the commonplace issued from there is that Hollywood is king of the world. But you can't reduce a canon to its (English-biased) first spot.

Hollywood didn't produce any canonical film (Top50) since the 1970ies !!! (No, Mulholland Dr. isn't American, ABC ditched it and France produced it!)

Are you serious? Talk about an American-centric bias in the poll due to an overwhelming majority of British and American voters. France is also heavily favoured in the number of auteurs, but not as much in terms of votes... So that's the mathematics of this flawed poll, of these biased voters. But does it reflect the actual situation of world cinema history accurately? Not quite!

So, was cinema greater in the 50-60ies or is there a nostalgic bias at work? When you see the density of canonical masterpieces before 1970, you wonder if cinema has declined ever since... As if Wong Kar-wai, Jia Zhang-ke, Zhang Yimou, Hou Hsiao-hsien, Edward Yang, Tsai Ming-liang, Ozu, Kurosawa, Oshima, Naruse, Kobayashi, Lee Chang-dong, Hong Sang-soo, Apichatpong Weerasethakul, Abbas Kiarostami, Tarr Béla, Aleksandr Sokurov, Theos Angelopoulos, Alain Resnais, Michael Haneke, Ousmane Sembene... never made masterpieces as great as anything made before the 60ies! This is ludicrous. I know the canon's inertia is full of nostalgia and conservatism... but this is forgivable for 10 or 20 years (2 polls time to adjust), not for 50 years! There are limits to the test of time, if a film critic needs 50 years to assess objectively whether a masterpiece is over-inflated by timely buzz/trend/zeitgeist... why the fuck are they even bothering writing on a weekly basis??? this is pure incompetence, this is bullshit!
We need a referential canon made by people who are more diligent to judge newer masterpieces (10 or 15 years at the maximum is acceptable) and revise the higher standards attained by recent cinema, instead of relying on outdated standards from the Classical era, when storytelling was much simpler, codified, censored and content more superficial. It's about time to give it's due distinction to the superior cinema of Modernity (which should be the center of gravity of cinema standards to date) for one, and to the very contemporary world cinema, from outside Western Europe and the USA. Because the greatest cinema is now made in Asia, Eastern Europe or South America... that's just a fact. And they deserve the recognition, the attention, the support from the critical institution, and from spectators.


From the directors cited in the Top50 Canon (+ the omitted masters; "?" not highest canonical level) :