Sex and nudity have become more prevalent in popular culture (novels, comics, advertising, music video, TV, cinema, contemporean theatre, internet) since taboos around sex losened up, and pornography gained a subversive hype claimed by certain alternative scenes (porno-chic). Erotism or hardcore porn are tolerated public discourses now, in the street or among scholars, either for banalized entertainment or out of derision. Today private issues such as initiation, frustration, masturbation, impotence, voyeurism, perversion are official plot drives in comedies or dramas, bringing to the spotlights the action hidden backstage in the lives of fictitious characters.
Sexuality used to be implicit or just absent of mainstream movies, with characters ridiculously deprivated of sexual lives. Never since In The Realm of Senses (1976/Oshima) did high-brow artfilms promote a serious look at sex than in recent years.
Sex is THE subject and object of the film now, no longer a suggestive elliptical climax.
More auteurs risk to introduce pornography in their work, fascinated by the impact of raw sexual images on screen as a narrative item dissociated from the arousal potential of X-rated movies that are not shown in public theatres. They bare it all and get right to the point, being as factual as possible.
Also films of Hong Sang-Soo, Greg Araki, Larry Clark, Kim Ki-duk, Catherine Breillat
They always cause a moral controversy among critics and split the audience, but push an evolution of mentalities after censorship vetoes are overturned by rehabilitations, questioning the issues around this taboo born of a deeprooted strict christian moralisation of sexuality (structuring the western culture for centuries) that is totally absent in eastern culture for instance. This is the social and artistic context that informs the motivations behind The Wayward Cloud's overt provocation.
. 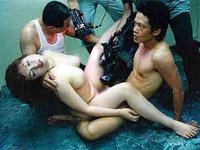 I think I lost the original impulse to organize all my notes. It's getting more factual and less didactic, not to mention over-extanded.
Anyway I want to finish this so I can review other movies like A History of Violence, Me and You and Everybody We Know, Battle in Heaven, Caché...

As usual all comments (good/bad) are welcomed to expand the interpretation deeper than my laundry list. I know I'm pushing some improbable theories there...

What do you think?