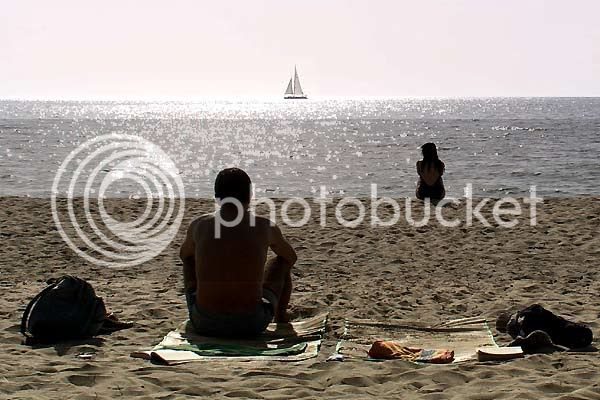 Isa and Bahar take a sunbathe on the beach, the sun is hot, their skin is greasy and sweaty. She wakes up from a bad dream (she imagined he smothered her head with sand), uncomfortable and lonelier than ever. I believe it's right after the argument they have at a friend's dinner and before the motorcycle ride.

The composition of this static shot is very classic, almost like a kitsch romantic postcard : the beach, the sea, the sky, a couple side by side on the beach cut out in backlite silhouettes. The woman in the distance, out of touch object of desire, and her "prince" in the foreground. They think about eachother and dream of love.

But since the opening sequence (then comfirmed with the bad dream) we know the romance is gone between them. The shot starts with Isa (him) lying down. I can't remember his dialogue (maybe he's still asleep), but I think she doesn't utter a word since the bad dream and just walks away to sit over there (photo above). They are still together at this point but cold and distant. So the dreamy look of this shot is contradicted by the inner conflict bubbling under.
We see a couple sitting away from eachothers, it's easy to understand something wrong is going on with this couple. Not quite the fusional passion of the early days. But the symbolic analysis tells us more about them. What makes this composition so important is there is no other camera angle (that I recall of) to show this part of the scene, no countershot to see her face, no shot of the boat alone, or her in the foreground. This is the end of the scene (long still take) that states, in stasis, the status quo of their relationship (which is not satisfying and shall be disengaged).

The screen is divided horizontaly in 3 strips (sky, sea, beach) with different colors and textures. The beach limit marks the middle, twice as thick as the "sea" and "sky" areas above the mediane. The unity of colors reinforces this grouping, sky and sea are light grey, bright, transparent, etheral, while the beach is rough, darker and textured.

Now the symbols. Each area has its figure that sits on the lower limit, as if stacked on top of the strip below.

This already establishes the partition of (symbolic) space and the clash between characters. Which has not been properly spelt out thus far by the film and announces their violent split up in the next scene, because he didn't see it coming in this scene and didn't hold her back when it was still time.

Acquarello associates the motorcycle accident following this scene (when she blinds him with her hands to kill them both), with the symbolic blindness of him who couldn't see how unhappy she was, how their couple was going to an end.

"[Isa] deliberatively shoots a series of photographs of ancient ruins for possible use in a class lecture, oblivious to his traveling companion's noticeable discomfort and tedium over his latest distractive side trip (a figurative myopia that would subsequently be manifested in Bahar's reckless, symbolic act of blindness during a motorcycle ride), her sense of profound desolation and estrangement momentarily betrayed by the eruption of tears that also escape the self-absorbed Isa's regard."

Here is an image from the bad dream (at girl with a movie camera), from the Apple trailer.

If I remember correctly, instead of strangling her, doesn't he smother her by burying her over with sand? It also makes sense because he does, in a way, try to control all aspects of the relationship, where they go, what they do, who they see...like later on, when he tries to get back together with her and he tells her to quit her job and move back to Istanbul with him. There's a sense that she feels smothered by his controlling nature, and she's suffocating from their relationship.

Thanks for the correction acquarello. I will fix that. :)

I remembered her waking up with a sensation of choking (from last july when i saw it), and looking at the trailer I worried I got the wrong wording for this. And of course, to bury her head over with sand is a much subtler and more sensible way to convey this image than to strangle her!

What's interesting about this dream is it starts with her ideal/fantasized vision of him (the kiss on the trailer is also from the dream), and then the principle of reality takes over and the pretend-nice guy turns into a murderer figure.

As you explain, it's the perfect illustration of their relationship, if only extrapolated into dreamy caricatures.

Apart from the sumptuous cinematography in the film, what makes it great is how the couple psychology is metaphorized through clever mise-en-scene instead of wordy dialogues. And the image alone install the feeling of oppression, domination, entrapment, as well as the ambiguity of this "love-hate" impossible love.

More spoilers : the ending is frustrating but really interesting, when she comes back to him in his hotel room, he lies, pretending he didn't cheat on her, but she doesn't give in, and sleep apart, both miserable.

The psychology of love/sex dependance despite contradictory feelings/reasoning is illuminating there.

Exactly, there's something very sensual and tactile about him gliding the sand over her body, so as you've noted, it's almost like a kitsch scene from a romance novel - or a Chanel No. 5 commercial ;) - but then, all of a sudden the same action turns from a caress to something very sinister.

Doesn't the sailboat subsequently re-appear going in the opposite direction also (maybe more than once)? I think it was either just before he goes to see the mistress, or before he heads east to look for Bahar. It was another clever indication of the way their relationship keeps going back and forth, but never goes forward...no direction.

The dream would be interesting to analyze too, but I couldn't remember well enough to make sure I would make no misinterpretations... in dream-work details matter a great deal.

I think I recall this scene begins by the dream, so the audience believes it's reality, and we are as surprised as Bahar, when it cuts to her awakening to consciousness.
I like your Chanel N° 5 commercial comparison! :)

I don't remember noting other occurances of the sailboat when I watch the film... but here is another still

I also note in the trailer a frontal shot of Isa on the beach, so contrary to what I suggested above, there might be a counter-shot after the still I posted...

oh and here's a beautiful pic of her waking up from the dream
Unlike with a loving couple, she keeps it for herself instead of sharing her awkward experience with her "better-half". Their eye look diverge, avoid contact, never meet.