More countries at the low level, to get a more complete picture worldwide. Likewise, data are either from 2008 or 2007 when available. But as data for smaller countries are harder to find online (because they interest less statisticians and economists...) sometimes the number comes from up to 10 years ago. But it gives an idea of their ranking anyway, since a park of screen doesn't vary dramatically (except in case of a major economical phenomenon).
We may compare the respective ranks of these countries, with their ranks in the previous graphs. But we'll get a better idea with the oncoming "screens per capita" and "audience per screen" charts.
Let's note that from Lebanon downward, there are only a double digit number of screens available for local filmmakers to show their films in their original language to their domestic population. Imagine how one could fund a reasonable budget and plan a profitable career for a film, less than 100 screens at the time, in a couple of weeks! It's like a "limited release in selected cities" in the USA, except that there is no hope to expand in case of success.
It is unbelievable that stars manage to arise and prosper on the international scene in countries like Lebanon (Hadjithomas/Joreige), Serbia (Kusturica), Lithuania (Bartas), Cambodia (Panh)... Please be kind when you insinuate certain indie filmmakers don't make films to please their domestic audience, but allegedly to appeal to international festivals or foreign critics. Cinema is an expensive industry that cannot sustain itself with a handful of spectators only.

Backtracking a couple of decades to see if there are notable trends and variations. Globally there is constant growth between 1985 and 2000, almost double the park of screens everywhere. And then a certain stagnation since then.
Too few data for China and India! Anyone knows where to find a more comprehensive survey for these major cinema nations?
Note: the anomaly for Italy (1996-97) is probably due to a change of survey criteria, making 2 sets of databases that might not cover the same types of cinemas. 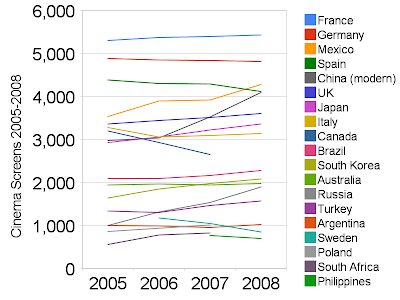 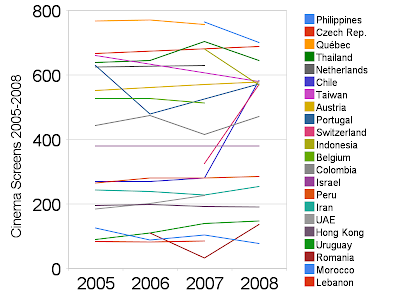 An article in Screen on the growth of theaters and screen in the upcoming years in India.