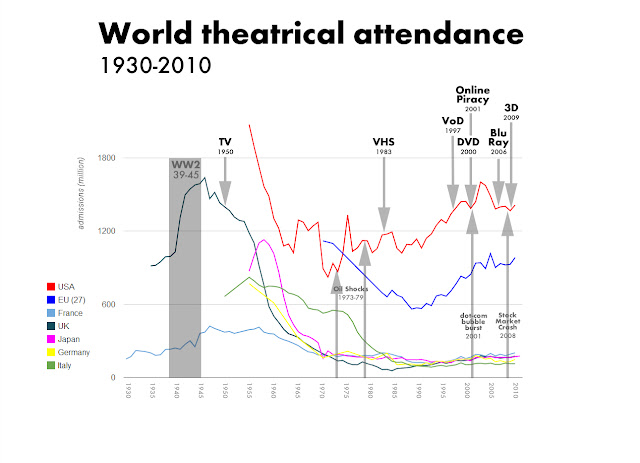 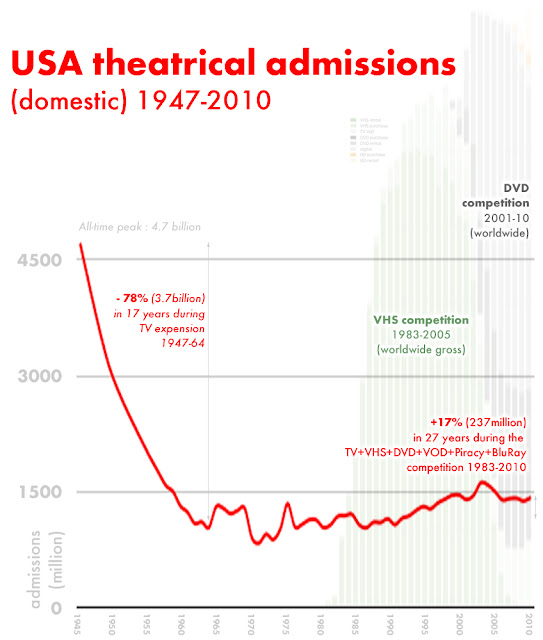 The golden age of the Hollywood studio era peaked in 1947 with 4.7 billion of yearly admissions. With the advent of TV, the yearly attendance for theatrical screenings dropped by 78% in only 17 years (reaching 1.02 billion in 1964). Clearly Americans went less to the movies. This is what I call a crisis for the cinema audience!

Meanwhile, the UK (which reached an all-time peak of 1.6 billion in 1946) lost 1.278 billion (also -78%) in 17 years (1946-1963). Futher plummeting to a lowest point in 1984 (54 million), just before the invention of the VHS, and has slowly climbed back up ever since. Only a slight plateau being experienced since 2002. We notice how the UK mirrors quasi-perfectly the variations of the market dictated by the USA, precisely because the distribution is so directly dependent on Hollywood imports.
France also peaked in 1947, although I'm curious to know why it only reached 420 million (a 1/4th of the peak number in the UK, country of a comparable size! also less than Japan, Italy and Germany! however the situation is reversed today and France leads the European pack) The notable difference is that the UK (like the USA) was not occupied by Germany during the 6 years of WW2 leading up to this golden age apogee. Anyway it is also interesting to emphasize that with such a lowest score of "mass appeal" within the general population, far from the score met in the UK and the USA, the cinéphile population in France achieved SO MUCH more in term of developing and improving serious film culture. And the cultural gap is obvious today. How come, with such an overwhelming enthusiasm/popularity for this medium (4 times higher in the UK and 11 times more in the USA, a bigger country though) amongst the general population, these 2 countries didn't find as many hardcore cinéphiles to educate the rest of the population in seeking art and worldwide diversity in their daily consumption on the big screen??? They got a larger total fanbase, and within this pool of consumers they still managed to get a lesser ratio of artfilm lovers vs. mainstream consumers... This is baffling. Contrary to the USA-UK twins, the postwar crisis didn't start immediately in 1947, France enjoyed a relatively stable plateau between 1947 and 1957, a period when all the golden-era Hollywood films blockaded by the Germans during the war, were finally screened. This coincides with the boom of the ciné-clubs and the Cahiers-Positif emergence. The phase of decline, until 1971, dropped 58% (239 million), in 14 years, remaining above the British level in the following decades. Since its lowest point in 1992 (116 million), it also enjoyed a progressive crescendo until today.
The stats for Japan I have do not track back as far as WW2, but there is a delayed peak (if not the all-time apex) in 1958 (1.1billion) corresponding to the rise of the Nuberu Bagu (the Japanese New Wave, the only one that predates the French Nouvelle Vague). There is also a dramatic drop until 1970, a relative plateau until 1953 and a slow but steady recovery since 1996.
There is also a delayed peak in 1955 for Italy (corresponding to the neorealist craze), and a much less dramatic decrease until 1974 (corresponding to the Modern cinema boom of Italian masters such as Antonioni, Fellini, Rossellini, De Sica, Pasolini, Leone, Bertolucci...) only losing 34% in 20 years. Then a quick fall, losing 77% in only 10 years.
The European Union (27 members) also shows a lowest point around 1988, and a steady progression since, paralleling the American numbers.

Now compare this genuine, visible debacle, to the virtual "pseudo-crisis" that paranoid Hollywood executives think they are being victim of today. The competition with VHS, DVD, VOD and BluRay is serious and also visible (bar chart superimposed; not just the numbers for American sales/rent but a worldwide survey). Since 1981-83 with the VHS (sale+rental), which was relayed by the DVD (sale+rental), and marginally by VOD, the competition traditional big screen theatres must face is fierce. And the unquantifiable black market of VHS piracy first, then online piracy, is probably a serious competition as well (at least in numbers, if not in direct customer conversion).
Yet, with all that, and the continued prosperity of TV (which channels offers have expanded exponentially since 1964!) Hollywood still managed to grow 17%... where is the so-called crisis??? Shouldn't we be looking at negative numbers there with such a multi-front competition? The American attendance didn't drop like in the post-war era, didn't even stagnate during that alleged "crisis" which would be understandable, NO, on the contrary, in spite of all adversity... it grew instead of plummeting.
Surely, the Hollywood executives would love this curve to climb steeper (instead of stabilizing around 1.5 billion since 2000), but shouldn't they feel grateful for what they have, a stable situation, rather than a drop of over half of its total, in comparison to the post-war demise?
Seriously, is it more likely the DVD market or the online piracy that broke the ascending curve around 2003???

Of course there are other hidden factors to take into consideration, like the population growth since 1947, the fluctuations of the ticket price, the variation of the purchase power, the quantity and quality of Hollywood films (since 95% of these numbers go to American-made movies), and the more appealing upgrades of theatrical premises, the explosion of marketing techniques, the lowering age of the target audience, the crave for event-releases, the appeal of sequels...

Moreover, if its the big screen sector that suffered (the proper way to experience a film), the cinema industry still makes money with the VHS-DVD-VOD-BluRay rental/sales... and sells broadcasting rights to TV for showing films on the small screen. It's more a crisis of the exhibition circuit than a crisis of the profits made by studios! And, I suspect, a bigger profit than ever before, due to the rise of ticket price, the spectrum of exposition and especially for Hollywood, the hegemony on the worldwide market of its blockbuster releases (although the average production budget also exploded since the Golden Age...)

But considering the evolution of the cinema consumer habits in the past 30 years, sharing its attention with TV, internet and videogames, from my point of view, I believe that a +17% growth is a good job. So stop saying that online piracy is stealing all your profits! Your profits are long gone since 1947... the epoch of cinema reigning supreme at the top as the sole popular mass entertainment is over. Today it's about sharing. Sharing space, sharing time, sharing investments, sharing exposition, sharing revenues...
Let's not forget that, while online piracy DID NOT KILL whatever remained of the cinema industry in the 70ies, the internet helps bring more people to movie events around the world, in many subtle ways, most of which are not retributed by the studios. The buzz around new releases, or re-releases is in great part assumed by thousands or millions of unsung heroes, bloggers, forum-activists or YouTubers who spread the word like a publicist would do, only without getting paid for their job. We don't hear the studios campaigning for the grateful remuneration of everyone who contributed to make a publicity campaign a success. No. For this they don't owe anything... but if they're caught "stealing" the video of a trailer, they get banned right away!
It's time to call for net equity. Give and take. This is the end of the total profit, controlled entirely by studios, 1 view = 1 fee. This cannot persist in the XXIst century, at the age of MULTIMEDIA and MULTIUSAGE. Fees shall adapt to the various uses. And gratuity should also be considered in certain cases, when the regulation is impossible/absurd/unfair and where the compensation in publicity/notoriety comes back to the studio through indirect ways.

The NYT still in total delusion fed by the studio rhetorics:

"It was the summer that North American movie attendance continued to slide, Hollywood’s reliance on overseas ticket sales intensified, the Smurfs flexed their minimuscles and a cadre of A-list stars flopped — again."
Neither Smurf Nor Wizard Could Save Summer Movie Attendance By Brooks Barnes (4 September 2011)

again, the cry-babies complain because their summer season didn't make record sales... even though they hold an uncontested monopoly on almost ALL foreign markets and still make more money at home than any other country in the world (even India and China!). WHY DO THEY WHINE EVERY FUCKING SUMMER???

Kristin Thompson: "One summer does not a slump make. Nor does an entire year. Yet at the end of 2011, the press was trumpeting the fact that the film industry was suffering a slump that might become permanent. After all, “the movies are in a slump!” makes for more catchy copy than “the movies have sunk back to normal” or “the movies are in a downturn from which they will probably recover.” [..]
Hollywood box office has its ups and downs, which is only to be expected. One year the successful releases cluster together; another year, they spread out or drop off a little. Any decline will be seized upon by many reporters as a slump, a sign that people are souring on the movies and turning to the many other forms of pop-culture entertainment available in the digital age. [..]
We’ve seen that Avatar’s 2010 box office was comparable to two major blockbusters. [..] That’s the equivalent of having four very high-grossing films in one year. [..] These are exceptional years, so one would expect the box-office to sink afterward. Yet somehow the industry and the world of entertainment journalism see years with such big box-office spikes as forming the new norms against which all other years should be judged. Studio executives seem to think that 2002 or 2010 indicate a realistic goal that they could achieve all the time, if only they could put out the right films. Almost inevitably, articles on declines in box office end with the notion that the films released in that particular year or quarter were just not appealing enough. But of course, there’s no way to deliberately achieve such a combination of blockbusters."