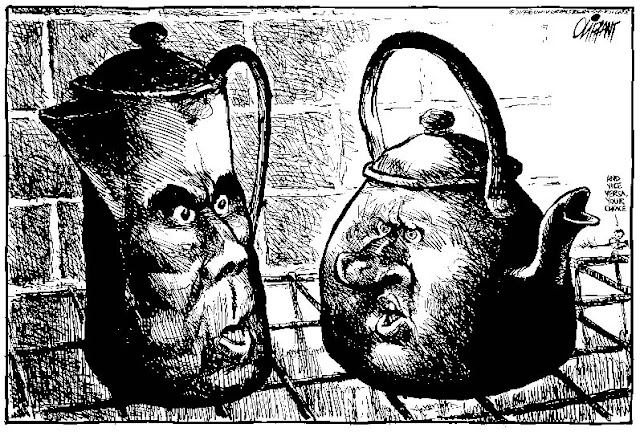 "It is rare that marquee international film events take place in China. That is in part because of the censorship imposed by the government. Then there are the tight limits on the importing and screening of foreign movies, which cast a shadow on attempts to bring new film experiences to China."

What a noble gesture for the USA to bring "cinema diversity" to China, as if they had anything to teach in this domain...
Censorship on domestic and foreign cinema, there is indeed in China. There is a quota of 20 foreign titles per year since 1994. We do wish for the Chinese government to improve its policy, especially for the artistic freedom of its own filmmakers. But despite such administrative restrictions, foreign films in China (mainly Hollywood titles btw) manage to earn 39% of the admission market! And China is amongst the large producers of film in the world (500 films in 2010), so they don't leave such a big share to foreign films because of a lack of domestic production, like small producer countries do.
Meanwhile the patronizing "land of the free", the USA, with no quota and no governmental censorship, only opens a 8.4% (2009) window to foreign films (5% in 2008) on their exhibition market!
Last month (October 2011) the USA "generously" gave 33 screens to the opening of the single Chinese mainstream blockbuster of the month : 1911 - Xinhai geming.

Wow. I don't think the Hollywood industry is in a position to lecture any country about their "openness" to "new films experiences"... the shadow is cast on the USA. Instead, the NYT should open their eyes, look around and see the plank in their own eye, and wonder WHY China is LESS isolationist than them, in spite of the protectionist measures!!!
The only countries you could harass would be India or Iran, they are in your league of isolationism.

Hello? New York Times? Anybody home??? Are you publishing disingenuous bullshit to brainwash your readers so they think that Hollywood is the good guy, the one that brings freedom and democracy to the world, and that the world welcomes you as liberators? Is it journalism or is it propaganda? You're just part of the marketing machine, aren't you? I thought you published facts... Am I mistaking "The New York Times" with another newspaper with an actual reputation for journalistic excellence and objectivity? This is a joke right? 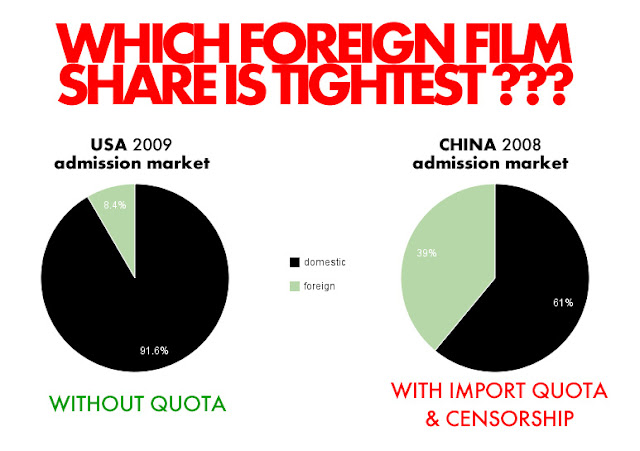 
SERIOUSLY?... DUDE!
Who are we kidding here? Who is complaining about the other's hermetic market??? Are you fucking blind? They are totally delusional...

I don't have the stats handy for the Hollywood share on the Chinese market, but we can easily assume a large chunk of these 39% are Hollywood blockbusters. Looking at the following BO top5's corroborates this hunch. On the other hand, there is no Chinese movie, ZERO, in the USA BO top5, and we know that they are distributed on a "limited release" and only gather a slim slice of these 8.4% (which large majority goes to Europe).


When 3 out of 5 most viewed movies in a country come from abroad, and 20 foreign films rack up nearly one third of the BO revenue (leaving 2 thirds for the 406 domestic films), I don't think we can speak of a problematic import/export balance... not given the state of the movie industry everywhere else in the world. 40%-60% is a pretty decent level, one that should be seen more often on the world market. If anything, this is a situation problematic for the Chinese industry, and they have the moral right to proceed to protectionist measures to make sure they don't loose a greater share of their market, or they would risk the bankruptcy of the local chain of film production.
At least in this domain, we can't reproach China anything. And using buzzwords like "censorship" or "import quota" to nitpick at openness to foreign cinema is disingenuous... Hollywood is only trying to widen the breach and get the lion's share in China (a most profitable market if they managed to extend their hegemony within Chinese culture), like in other countries their hegemony has conquered and submitted. They don't care about DIVERSITY on the Chinese market, they'll be happy as long as 100% of the foreign share is owned by American blockbusters, while they don't give a shit that the USA is not opened to foreign films at home...
China has the potential to produce a lot more movies than their current level. Domestic production comes a long way, and slowly builds up in recent years, since a low point (only 82 films) in 2001. China could reach a level somewhere between Japan and India. Thus, the foreign film share can only shrink in proportion to this prospect. And they proved they can make quality mainstream entertainment comparable to Hollywood.
Instead of whining, you should enjoy this privileged position (39%) on the Chinese market. Expending their production can only loosen and diversify the rules of censorship and the repression of Chinese artists, in the long run maybe, but inevitably they will open up (as they already have economically). 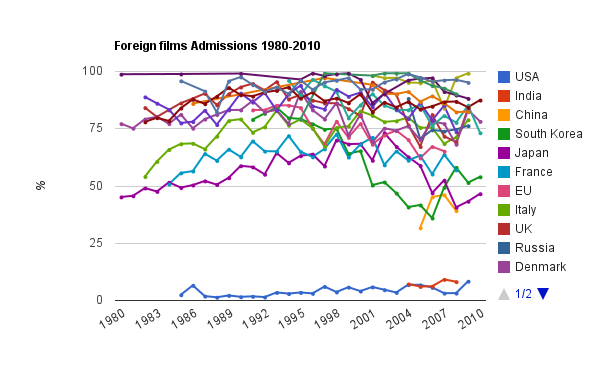 Now, speaking of human rights infringements, repression of minorities, summary imprisonments, restriction of the media liberties, internet surveillance and censorship, mass media indoctrination, freedom of artists and journalists... YES, we may engage in a debate on these matters with China's government. Of course. But if USA cared so much about pressuring the Chinese government in loosening these rules, they wouldn't accept Chinese money to finance their bottomless dept! This is not a comfortable position to engage negotiations... obviously. If anything, China, is in a position to be demanding towards the USA for the return of their loans!

This said. I know (or I'm told) that the governmental policies are more drastic and perverse than what Michael Wines reports, because it entails other untold control and punishments.
BUT, in absolute, taking his report at face value, is nothing to frown upon :

"The new rules also require journalists to produce at least two sources for any “critical” news reports and to personally conduct interviews when gathering information.
False reports must be followed by corrections and apologies, the statement said, and serious violations could lead to the suspension or even the revocation of a news outlet’s government-issued license."
(Michael Wines; 11 Nov 2011; NYT)

If this was published in the USA, there would be nothing wrong with it (except the part about revocation of licenses maybe). Of course we want the press to publish ACCURATE and CROSS-EXAMINED sources!!! This is basic journalism.
And, honestly, the American Twitter could use some of this advice too. When you see how fast news (and false news) propagate on microblogging... it calls for serious concerns from any government. Stupid jokes, libels or hoax could easily escalate out of control.
I don't see why anyone would feel offended by Journalism trying to keep mass media in check, regarding reality-check, truth and fairness.

Now, what the Chinese government will use these rules for and pervert them for political repression, is another matter (one that should worry us). But expecting a certain moral standard in the press and online is much needed. And apparently, the film pages in the NYT could use higher standards.

"China is a nation on the move - and Chinese movies are no exception. Here you'll find the world's fastest growing movie industry, where luxury Cineplex’s with 3D projectors and IMAX screens cater to a booming leisure class.
Chinese movie theaters raked in $1.5 billion last year and are expected to make more money in the next five years than even American movie theaters. Now Chinese moviegoers still prefer to watch Hollywood imports, but there have been a few breakout hits from the mainland.
Let the Bullets Fly is a rollicking, action-packed period comedy in which high-level swindlers face off with a powerful bandit played by Chow-Yun Fat. This year it became Mainland China's all-time top-grossing movie, beating the record set last year by Aftershock, a remarkable drama about a 1976 earthquake that killed over 200,000 people. It's directed by Feng Xiaogang, who is so successful in China that he's been called the Chinese Steven Spielberg. Neither of these blockbusters are officially available in the US, but another important film is coming soon to home-video : City of Life and Death [..]"
From escapist entertainment to reality, Kevin Lee reports on Chinese cinema today. (Ebert presents at the movies; 28 Oct 2011) video 4'48"

oh they edited out the part about "Aftershock" and "City of Life and Death" on the Ebert show segment (only 3'41"). See the full video at dGenerate here. And I linked the Ebert site, because I thought they did a good job at plugging something about China, and they cut out the sentence that says Chinese blockbusters are NOT RELEASED IN THE USA... [rolling eyes]

"China has increased the number of Hollywood imports allowed into the country, but more competition could help free up its homegrown industry [..]
The quota has now been expanded to 14 more films in Imax and other large formats, and leaves foreign film producers with a larger share (25%, up from 13%) of the profits. Chris Dodd, chairman of the Motion Picture Association of America (MPAA) hailed it as "a very big deal" for a US industry eager for a bigger bite of China's box office, but some commentators were more cautious. [..]
But Hollywood can console itself with how much appetite China has for its films; even under the previous quota arrangements, it had a 50% share of the market. [..]
Critics always spit out the P-word – "protectionism" – but surely quotas are just levelling the playing field for smaller industries that can't compete with Hollywood's marketing dollar? [..]"

"China, with a population of 1.3 billion and more than a thousand screens built each year, already has strict limits on the number of U.S. films that can be released there. And why should this change radically, when the U.S. remains so resistant to Chinese movies? Even China's biggest-budget film ever, Zhang Yimou's $90 million The Flowers of War, has made a mere $205,778 in the USA. "It was a complete flop," says Gill."
How Hollywood conquered the World (All Over Again) (Stephen Galloway; Foreign Policy; 23 Feb 2012)

"the Securities and Exchange Commission is looking into whether or not, in the mad dash for Hollywood to capitalize on China’s developing production infrastructure and vast box office potential, American studio may have paid off Chinese officials to secure footing in the Chinese film industry"
Overheated China: Hollywood, the S.E.C., and Chinese Film (dGenerate; 26 April 2012)