Many times this year was Film Criticism contemplated and reconsidered, with numerous conferences, roundtables and publications around the world. A decline of the Press business with its restructuring purge initiated this exceptional self-examination, as if critics could only reflect on their role in a changing society when their payroll is menaced... 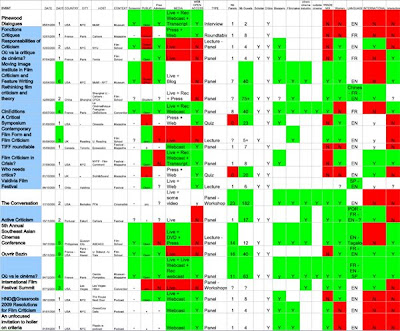 In a synopsis compilation (see the table here), I've noted 22 events this past year, 16 of which were concerned by the Film Criticism Crisis (in blue on the table). But I was only able to follow closely the complete content of 13 of them, so instead of comparing their respective pertinence, I'll check their compatibility with a 21st century discourse. To me, every conference on cinema should be inclusive of varied and complementary aspects of Film Discourse, and accessible to the widest demographic. Each get bonus (in green) and malus (in red). So my criteria to develop the full potential of such events today are :

INTERNATIONALITY
(foreign relations and multilingual)
Philoxenia. Welcoming the Other. The "Other" being the one who doesn't match the pattern of my peers (different language, culture, history, country, locale, city, movies viewed, opinions, taste, theories...) Confronting diversified positions, contexts, conjunctures and school of thoughts, makes a roundtable richer and more powerful. Multiculturalism involves the participations of foreigners in the debate, but also the attention to a non-local audience/readership (with translation for international circulation).
Too often these events are isolated elite groupuscules shut out from the outside world, indulging anachronistic problems inherited from the circumscribed conjuncture imposed by the local industry that shapes their mentality.
Movies belong to everyone, beyond borders. Cinema is a global village and issues should be debated openly with the international cinephile community. No reason to keep Film Discourse segmented regionally.
Half of the events on the list are national-centric. The most open to the worldwide scene are Active Criticism in Portugal (but apparently mainly Euro-centric), the NYFF Film Comment panel (which invited critics from Korea, France and Germany), Ouvrir Bazin (with French and Americans but was a truly bilateral conference almost duplicated both in Paris and in Yale!), Responsabilities of Criticism (with scholars from USA, Australia and also by proxy France), the Bazin event in Shanghai (though I don't have much info on the details), and lastly the best one is Où va le Cinéma? in Paris (which actually held a panel on purpose with filmmakers from Argentina, Romania, Belgium, Malaysia).
Mention to the Sight&Sound poll (which invited critics from UK, USA, France, Iran, Australia, Denmark, Germany and Japan but without interaction between them).

OPEN ACCESS
(free availability and permanent online archive)
I don't understand the rational to keep the content private, to charge attendance (with prohibitive fees!) and make it a members-only club closed to the general public during the live event... There are other ways to fund an event. The debate itself should be offered to the public domain for the benefit of global Film Discourse.
Certain early 2008 NYC events promised to put up online the transcripts... and never did. So kudos to the Film Comment panel for offering full transcript and videos shortly after the event! Like the Pinewood Dialogues, with audio webcast plus transcript.
The winner of this list is Paris event Où va le Cinéma? with a live webcast of all 11 panels which are archived for permanent viewing.

INTERACTIVITY
(multilateral talks, reader feedback)
One of the major improvement (over the Paper Press) brought by Web 2.0 is of course participation of the readers/viewers. Unfortunately first of all there are some unilateral events disregarding any reaction/input from their audience (if there is any), like magisterial lectures, questionnaire, interviews or traditional articles. Honestly I much prefer the more open minded forms of the workshops, panels, seminars. Not only the participants of the conference are able to interact with each other, but with a public (audience/readers) too.
This could be even ameliorated by giving voice to the internet audience, with for example the possibility to leave questions prior to the event (like at the Pompidou seminar in Paris, another award for Où va le cinéma?).

TRANS-CORPORATION
(reaching out to many professions of the industry)
We too often see these debates held among peers, or even between friends who share each others positions. There is hardly criticism within this kind of context. So it's important to favour diversity, reaching out across the aisle to the competitors or the other end of the spectrum to create a productive brainstorming rather than a self-congratulatory consensus. It's more interesting to listen to what filmmakers have to say about their perception of Film discourse from their side of the fence. To invite non-critics to talk about film Criticism theories from their perspectives, like screenwriters or producers or publicists or even onlookers from outside the cinema industry like writers or philosophers or artists...
The critics v. critics always comes down to the same endless territorial battles of preferences and hierarchies.
Fortunately, a good number of these events avoided insularity. And most of them invited bloggers, since the rivalry with the blogosphere was a major issue of this Press crisis.


Thus I hope future events will be designed with these criteria in mind.


Links to the events cited can be found on my earlier hypertext 2008 calendar.
More comments later (in the comments).
N.B. Informations on this table are general indicators, from what I could gather and the eventual replies I received from people who attended. So corrections are welcome if you see fit. You may also add events not on the list in the comments.
Publié par HarryTuttle @ lundi, janvier 05, 2009