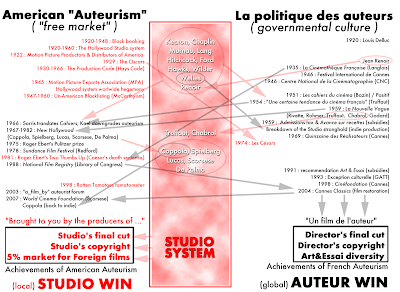 Gavin Smith : "Over the course of the last 30 years, art cinema, or what the French call 'auteur cinema,' has to a great extent been annexed by (or surrendered to) the not-dishonorable commercial imperatives of turning out product in order to put bread on the table, product that, for all its modernity, some regard as a return of the repressed: the dreaded Tradition of Quality, caricatured by Cahiers du cinema back in the day, alive and well in stylish new clothes." (Film Comment, March/April 2010)

"I do not believe in the peaceful coexistence of the “Tradition of Quality”
and an “auteur’s cinema.” [..] It is not the desire to create a scandal that leads me to depreciate a cinema so praised elsewhere."
François Truffaut, Une certaine tendance du cinéma français (Cahiers #31, January 1954)

Harry: with regard to American film, not enogh attention has been paid to the effect of the Tax Shelter Law of 1976, signed into law on Oct. 4 of that year. It wasn't just the success of STAR WARS and ROCKY that signalled the end of the adventurous filmmaking of the early 70s. A blurb in New York Magazine in 1975 sounds the alarm:

A summary of the law as passed:

That is a great quote; I've always enjoyed reading Gavin in Film Comment. Thanks for posting this.

What a brilliantly bizarre chart. Not sure about the causality, but it's interesting to see milestones of genuinely independent American players becoming marketed and franchised, or at least thinking they could play with the devil without creating a monster (i.e., Ebert and Redford).
I don't want to rehash the fabulous and endless responses to Girish's February post, but aside from our great republic's resistance to art subsidies, can we not also blame the total miscomprehension of "la politique des auteurs" in the Sarris days, particularly the elided emphasis on political resistance inherent in the expression?
Re Sallitt's helpful reminder of the Tax Reform Act, I wonder how much foreign capital has really offset the loss of tax shelters by now...

I'm not sure mercantile considerations explain why an actual auteurist revolution never came to fruition in Hollywood. Great art films have been, are and will continue to be made in spite of financial risks. It takes people who think about art before money to accomplish masterpieces.
The subsidies haven in France sustains the exposure of films d'auteurs on a decent commercial scale, to compete (almost on equal footing) with the mainstream fare, so that they could make money. But outside of France, in third world countries, art films are made all the time without a guaranteed commercial success, without an audience, without a supportive domestic film press. If Hungary can afford a Tarr Béla, if Taiwan can afford a Hou Hsiao-hsien, if Thailand can afford a Weerasethakul, I'm pretty sure America could find money to produce a decent art scene without tax breaks...

"Politique" in "Politique des auteurs" means policy, not political. The notion of "auteur" is an aesthetic challenge for intellectuals. The hidden agenda of the Young Turks to overthrow the studios and set foot in the industry themselves was an epiphenomenon of the conjuncture.
Film history could still use the concept of "auteur" even if the clash "Tradition de qualité"/Nouvelle Vague never happened. It's a theoretical heritage independent from financial considerations.

Thanks for your response, Harry.
I guess I'm not so much translating "la politique" (I wouldn't dare) as questioning whether there was enough emphasis in Sarris's day on the political influence of the declining American studio system versus the resilience of an auteur (self-admitted or not) who could emerge within that definitively political structure and leave their artistic stamp more or less intact. Like Oulipo mandates from the film industry! What does that tension specifically produce? In the U.S. at least, the concept became something of an ontological question, however correctly or incorrectly borrowed from the French (e.g., bickering over whether Mankiewicz or Welles can lay claim to Citizen Kane's greatness).
The U.S. film industry today will never fund an independent art scene unless one penniless filmmaker realizes an astounding profit from his or her personally financed film, at which point the film's "formula" becomes a commodity for future kitschy replicas. The industry can (but never will) fund a million art scenes; it doesn't know how to nurture anything that cannot earn money quickly and exponentially. It's like asking a fox to collect the eggs and leave the chickens alone.

Why do you get foxes to make films? Let the roosters in charge.
That's why the American "indie" scene is an insult to the word "independent" : filmmakers, screenwriters, actors, producers, audience... they are all fox cubs.

"Produced By 2010" conference, organised in Hollywood by the Producers Guild of America.

Marshall Herskovitz (President of PGA) : "What I hope for this conference [..] is that producers, once again, seize the center of this activity which we've been at the heart of all along, and that people will understand that without you, there is no entertainment business"

That's your "auteur-centric" industry right there...

"In a sense, the history of independent film has been one of improvisation and trial-and-error for a long time; witness the endless stream of films released to no notice and subsequent rediscovered years or decades hence by groups of crazed fans. At a time when the entire economy is in free-fall (or tentative recovery, who knows), it's odd to host panel after panel about the professionalization of one of the least professional arenas of film production. [..]
But the effort to professionalize independent film feels like a (fun, with lunch) way to ignore the cold truth: most people have never cared, don't care, and never will care. It's impossible to run around that by draping the trappings of corporate America upon a weird industry. This panic will pass -- ignored, now and in the future, by an "audience" that's referenced rather than reached."

"Then came Top Gun. The man calling the shots may have been Tony Scott, but the film's real auteurs were producers Don Simpson and Jerry Bruckheimer, two men who pioneered the "high-concept" blockbuster—films for which the trailer or even the tagline told the story instantly. At their most basic, their movies weren't movies; they were pure product—stitched-together amalgams of amphetamine action beats, star casting, music videos, and a diamond-hard laminate of technological adrenaline all designed to distract you from their lack of internal coherence, narrative credibility, or recognizable human qualities."

Sam Goldwyn (producer) : "I made the movie, William Wyler only directed it." [about Wuthering Heights, 1939]