Some definitions from the official dictionary that allows our society to communicate with a common language...

Not to confound with :

"The temperature range between 28° and 30°C or 82.5° and 86°F at which the naked body maintains heat balance without shivering or sweating"
(The American Heritage Stedman's Medical Dictionary)

Originally the Comfort Zone is beneficial to our biological system. We don't need sunburns or ice burns to prove we are alive. Not everybody needs to risk their life to feel alive. No reason to blame the general population (or the general audience) if they want their "comfort clothes", "comfort food", "comfort movies"...
The problematic is different when we talk about a specific group : critics. We expect critics to exceed their comfort zone because they are not the average movie goer, they do not watch movies for their own selfish comfort (not exclusively at least I hope), they are only paid to provide an educated advice to other movie goers, not to indulge their own idiosyncratic narcissistic envy, fantasy and pleasure (film writers often forget that!) that reinforce a craved sense of security (their comfort zone). 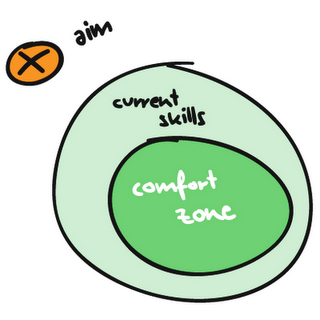 " The comfort zone is a behavioural state within which a person operates in an anxiety-neutral condition, using a limited set of behaviours to deliver a steady level of performance, usually without a sense of risk. A person's personality can be described by his or her comfort zones. [..] A comfort zone is a type of mental conditioning that causes a person to create and operate mental boundaries. Such boundaries create an unfounded sense of security. "
(Wikipedia)

The figurative meaning of the phrase, applied specifically to critical/competitive professions (always seeking to be off the edge, ahead of the curve) takes a new turn. In this particular condition, being safe, limiting yourself to artificial boundaries, sticking to your comfort zone might be detrimental to the practice of your job. It doesn't mean that EVERY critic MUST reject their comfort zone and throw themselves into a fastforward race to the next novelty, the random unknown, the unique stuff that nobody else promotes... Because this kind of attitude (that exists in certain hipster quarters) has the anarchical tendency to call conservative (or comfort zone) anything déjà-vu. The crucial difference is how you define what is the "comfort zone" and what is revolutionary.
We've seen how some critics feel better about themselves by trashing so-called "non-fast cinema" as if it was a (homogeneous) style that lasts too long, looks too old, out of touch with MTV frantic cutting... Totally oblivious of a wider context where "intensified continuity" is just as old and a very superficial imitation of contemporary technologically-addict lifestyles. It's all a matter of point of view. Yet certain critics are entrenched in their certitude that fast=good and slow=bad, no matter what. They are in their own comfort zone. And we could just as well burst that bubble.
Preconceived ideas, prejudices, contrived biases do not help to get Film Discourse to higher planes...

" A foolish consistency is the hobgoblin of little minds, adored by little statesmen and philosophers and divines. With consistency a great soul has simply nothing to do. He may as well concern himself with his shadow on the wall. Speak what you think now in hard words, and to-morrow speak what to-morrow thinks in hard words again, though it contradict every thing you said to-day. — ‘Ah, so you shall be sure to be misunderstood.’ — Is it so bad, then, to be misunderstood? Pythagoras was misunderstood, and Socrates, and Jesus, and Luther, and Copernicus, and Galileo, and Newton, and every pure and wise spirit that ever took flesh. To be great is to be misunderstood."
(Ralph Waldo Emerson, Self Reliance, 1841)

LOL. Seeking misunderstanding with everyone else to insure being above everyone else... This is confusing the incidental end with the performative means. I'm not so sure that whenever you are misunderstood, you are therefore profound. In fact, I'm pretty sure that is the definition of an ignorant in the overwhelming majority of cases. The value of these few geniuses cited is not defined by being misunderstood by an outdated paradigm (incidental and unfortunate) but by being understood by the new paradigm (groundbreaking leap forward).
In Europe we are Cartesian (Descartes, champion of reason), in America they are empiricists (Emerson, champion of individualism)... We believe empiricism is anti-intellectual, they believe rational thinking is elitist. That explains the cultural gap right there.
How ironic that 50 of the top100 best world universities are American, yet the American general public is amongst the most anti-intellectual, as if the American intelligentsia was insular, disconnected from its duty to educate its own fellow Americans.
That's what we have to deal with, when we engage the uphill battle against the humongous colossus that is the Hollywood culture hegemony throughout the world. And film writers who don't care about the absence of foreign film screenings in their country, the absence of critical debate, the dictature of the marketing talking points, the dumbification of the masses... are no critic at all.

" Conformity is the act of matching attitudes, beliefs, and behaviors to what individuals perceive is normal of their society or social group. This influence occurs in small groups and society as a whole, and may result from subtle unconscious influences, or direct and overt social pressure. Conformity can occur in the presence of others, or when an individual is alone. For example, people tend to follow social norms when eating or watching television, even when alone. "
(Wikipedia)

It's rather easy to mock the misconceptions, the outdated taste of distant generations... but it's another thing to be able to have the critical distance to judge clearly OUR controversies in OUR time as they unfold, without falling for the conventional wisdom bandwagon. We only need statistics to figure what is the opinion the majority of people go for, but it takes critical thinking to sift insights from fads.
It's all dandy to toss around words like "out of the comfort zone"... but what did you do to prove you oppose the inertia of the populist self-indulgence???
Criticism is for defiant reflection not for self-congratulatory fascination.

- Don’t cheat people by conspiring with them to protect their comfort zones.
- Don’t make religions and other such institutions the sort of intellectual comfort zone that prevents you from entertaining ideas that aren’t to be found there.
-Don’t waste conversation and attention on the superficial trivialities and gossip of the daily news, but attend to things of more import: “Read not the Times. Read the Eternities.”