Possible inspiration for TSAI Ming-liang's I Don't Want To Sleep Alone (2006) closing oneiric image of a bed drifting on a blackened reservoir water. FU Li's erotic drama, Devil Angel (1995), shows a similar image, visually at least, of a bed against a black background (not water), which is the visualizing of a dream, towards the beginning of the film, of the lead female character who imagines the best way to die together, ultimate romantic couple suicide, with both a bullet in the head.
Although Tsai claimed in an interview that this scene was inspired to him by a fortune teller he consulted in Malaysia, who predicted an image with a lot of black, or something like that... 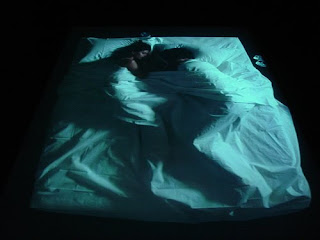 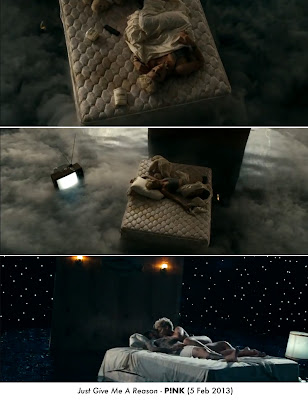 Addendum : P!NK - Just Give Me A Reason (5 Feb 2013)
A bed floating on dark water. There is even underwater shots. But it's more aesthetized, with fog over the water, and an incongruous TV set.