Mick LaSalle (San Francisco Chronicle, 17 April 2011): "Meek's Cutoff [..] Of course, it had to be as director Kelly Reichardt presents it here: quiet. Nothing around for miles. And boring. Ay, there's the rub. Boring. Probably no more realistic film has ever been made about Americans off to settle the West, and so "Meek's Cutoff" cannot be dismissed. But oh, if only there were a story here to latch onto, something, anything. [..] Lacking that, for all the integrity of its details and a good central performance by Michelle Williams, this film becomes excruciatingly, brain-fryingly and consciousness-losingly dull. [..] [Reichardt] She has the setting, the approach, the attitude and the vision, but she ducks the most difficult and necessary requirement of narrative art, which is the narrative itself. As it stands, "Meek's Cutoff" could have made a brilliant 12-minute short." [see Europe is too different]

Dan Kois (NYT; 1st May 2011): "As a viewing experience, “Meek’s Cutoff” is as closed off and stubborn as the devout settlers who populate it. (“Pleasureless,” raved David Denby of The New Yorker! “There is not much action,” noted A. O. Scott of The Times!) By the end, I could sympathize with the settlers’ exhaustion; I felt as if I’d been through a similarly grueling experience. Which is to say, it affected me viscerally, and I’ve found myself thinking about it over and over since. But during the time I actually watched the film, I had trouble staying planted in my seat with my attention focused on the screen, as the long dissolves from one wind-blasted plateau to another sent my thoughts blowing in a dozen directions.
As a viewer whose default mode of interaction with images has consisted, for as long as I can remember, of intense, rapid-fire decoding of text, subtext, metatext and hypertext, I’ve long had a queasy fascination with slow-moving, meditative drama. [..]
But while I’m grateful to have watched “Solaris” and “Blue” and “Meek’s Cutoff” and “The Son” and “Atanarjuat (The Fast Runner)” and “Three Times” and on and on, my taste stubbornly remains my taste." [See Dan Kois syndrome 1-2]

Neil Young (Project:New Cinephilia, 25 may 2011): "[..] one shouldn’t feel like some kind of heretic for pointing out that, say, Meek’s Cutoff is a waste of everyone’s time, effort and money. [..] why traipse out to a moviehouse to see Meek’s Cutoff (say), when we can stay home and watch a John Ford or, for the less “scrupulous”, Meek’s Cutoff itself via the alluringly larcenous magic of filesharing." [See Project: Validating Indulgent Movie Fandom]

Hard facts for the "cultural arbiters" living in truthiness :

These figures speak for themselves. The USA is a larger population, with more screens, with more screens per inhabitant, with more admissions, with a greater movie-going frequency amongst the general population, with more screens available per film distributed (70.6 !!!). So far it seems like the USA is a country more "cinephilic" (more moviegoing at least) than any other country... until we look in the details what kind of films Americans are screening/watching in mass, and it's not the artfilm sector that benefits from this affluence.
*If* moviegoers in the USA were as "cinephile" as other nations (and not more) the admissions for artfilms should be greatly superior to those of the UK or France by sheer mass of an overwhelming movie business. The USA could be less cinephilic and still manage to sell as many artfilm admissions as France, because the total turnout is so much greater, but that's not what we see.
Sadly, and against all logical statistics, the USA manages to score lower than countries 5 times smaller than its size!
Even for American-made artfilms, such as Meek's Cutoff or Tree of Life (which scared the hell out of Dan Kois and Neil Young). How can you score last with such a headstart (statistical advantages)??? How can you be beaten by foreign markets for the exploitation of your own domestic films??? How afraid are you of "niche distribution" to neglect your home auteurs???
The USA could save 6000 of their 40000 screens exclusively for artfilms and world cinema, that's nothing, not even 7% of their total available screens. And it would be over 100% of total commercial screens available in France or the UK! That would not hinder the business of Hollywood flicks in a noticeable way, and it would give to the USA the largest arthouse circuit in the world, something to be proud of. Nah. They can't spare even 1% of their commercial screens! They give between 1 or 6 screens to foreign artfilms and exceptionally, for an American-made artfilm, they dedicate a measly 200 screens... as if they didn't want artfilms to spread too wide in the American culture. Nothing to feel proud about for American distributors, American audience, and American critics. 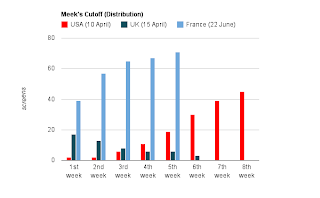 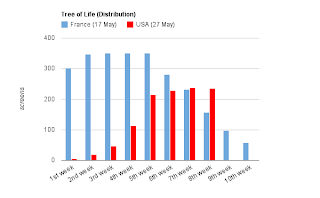 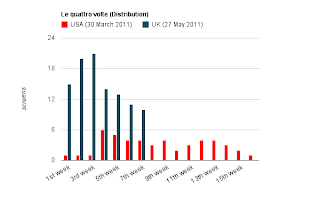 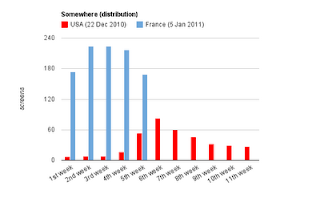 How come there are more screens in the UK and France opening for American artfilms like Meek's Cutoff, Tree Of Life and Somewhere than in the USA??? while there are LESS total screens, LESS screens available per film distributed, and the general population is going less to the movies per year in the UK and France. See a chart with more film titles in American distribution here.
Screen statistics will not automatically translate in box office success... it only means how accessible are the films nationwide, how wide the exhibition circuit is exposing the films. In France for instance (and in the UK to a lesser extent), the distribution and exhibition of artfilms (non-commercial) are aided through subsidies. So it explains why the distributors/exhibitors lose less money if the films screened are unsuccessful. But regardless for subsidies, the total number of screens is limited, and screening an unsuccessful film takes the spot of a potentially more profitable movie (subsidies do not replace a sold-out theatre), so it is always a commercial decision to give priority to aesthetic over entertainment.
There aren't even enough independent arthouse exhibitors in the USA to take the commercial risk to show  (internationally acclaimed) American artfilms to their customers... 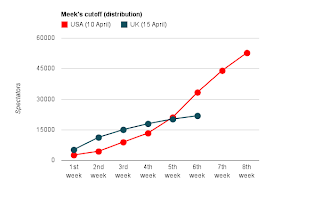 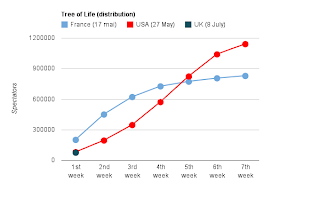 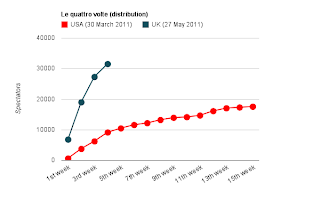 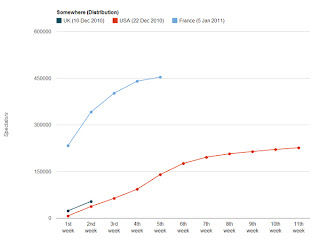 Now we can forget about subsidies, spectators are not paid to go watch movies they don't want to see (and the average admission fee is higher both in the UK and in France). The admission stats reveal exactly what people agree to buy a ticket for.
When we look at spectators statistics (admissions sold), it's about what the mainstream audience prefers to watch, so the low numbers are expected for an artfilm niche. A decent artfilm distribution never seeks to equal the mainstream entertainment BO, it will always be smaller even for a successful film and a plethoric exhibition, just because the reason (momentary distraction) that usually drives people to the cinemas is rarely to discover challenging film work. So here, no need to complain that the scores are lower, but we want to consider how much is TOO LOW for an artfilm niche? And what the proportion of the artfilm niche (domestic artfilms or foreign artfilms) should be within a given country.
America makes twice as much as the UK for Meek's Cutoff and barely makes more than France for Tree Of Life, while it should at least make 5 times more to match up with the same population proportionality.
Where are the American cinephiles who do not think, like 6 years old kids, that Meek's Cutoff or Tree Of Life is boring? Where is cinephilia in America? A couple of arthouses in NYC accepts to show challenging foreign films and that's it? How do you explain that??? What is the American "cultural exception" (polar opposite of the French exception culturelle)?

P.S. Except for Le Quattro Volte, none of these "slowish" American movies are "contemplative" in the sense defined by CCC. Just to be clear.