The elephant in the editorial room of American criticism... 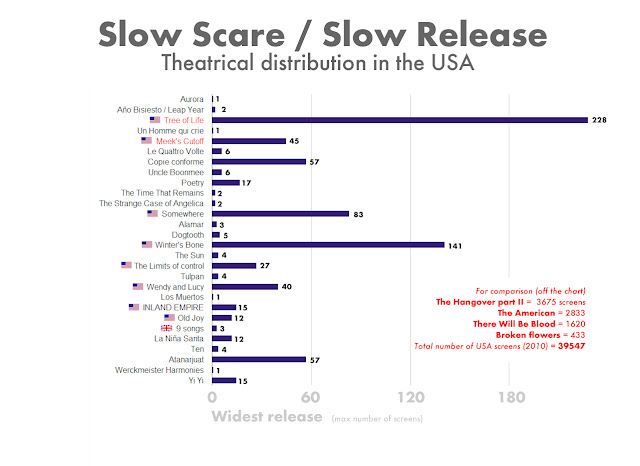 (Films in reverse-chronological order of their USA release date)
Data source: Box Office Mojo
Can't you see anything wrong in there??? This is absolutely ri-di-cu-lous!


All these (on the chart above) should get at least as wide an "arthouse-grade" release as Broken flowers (433), if not more, which is a mere 1% of available screens total. And the Tree of Life should not get any less screens than The American, from an aesthetic or commercial standpoint. But they didn't even get that... (the blockbuster treatment is about 3000-4000 screens in the USA = 10% of total screens) What the fuck is wrong with you guys??? The American distribution system is totally bankrupt.
These films are stereotyped as "relatively slowish". OK they will never reach the widest mainstream appeal of stupid comedies and children book adaptations... No argument there. And some of them have a very targeted audience because of a difficult subject, or pornographic images, or an uneventful nature, I understand perfectly that these only interest a very limited portion of the regular movie-goers... but not to the point where a country of 311 millions inhabitants must fit a niche of challenging artfilms lovers inside a dozen theatres... let alone a single one theatre!!!
4 screens equal about 0.01% of the available screens, is that the proportion of artfilm-friendly audience in the USA??? This is not even a niche, it's a negligible fraction in statistical terms. The "cinephile community" in the USA is virtually nonexistent.
If there was only 1 or 10% of the American population interested to watch artfilms, foreign films, subtitled films, challenging aesthetics... yeah that would be a marginal proportion next to the still overwhelming mainstream majority, like in every other country in the world... but I cannot believe there is no larger market than 0.01% for cinephiles who seek more than entertainment. This is depressing.
And these numbers on the chart are the "widest release", meaning the peak of maximum screens given to that film somewhere along its theatrical run... it never gets this many screens every week it's playing, be it 30 weeks (in the best case) or only 1 (pity distribution). Since American distributors don't have the balls to take a risk for a film they believe in, foreign films always open on a couple of screens, and only if the opening weekend is satisfying, they might expand little by little to the screens outside NYC, to other cities...
In France the films usually open on peak screens, and then they drop screens as the turnout starts to fade out, because distributors take risks for films they bet on (yes the state subsidies also help), the risk to meet the kind of audience they deserve. And the amplitude of the opening screens is instrumental in installing the buzz around the film. If it is available on many screens, it gets more attention, and people believe that film is important because of its wide exposition and the trust the industry puts in it.
But, but, but... American cinephiles watch films on DVD nowadays! Really? Is that your best excuse? If you call yourself a "cinephile", you wouldn't miss an opportunity to watch Tree of Life, Uncle Boonmee, Poetry, Alamar, The Sun, Atanarjuat, Werckmeister Harmonies on the big screen! These are cinematographies designed for the BIG SCREEN. Yeah, yeah, "Direct-to-video" is the fate of the most accomplished  aesthetic designs... What a shame.
THERE ARE MORE REVIEWS PUBLISHED ON THESE FILMS THAN THERE ARE EXISTING PRINTS OF THESE SAME FILMS IN CIRCULATION IN THE COUNTRY !!! WTF???
Do you really build your film culture on this mockery? Seriously, quit arguing about "cinéphilia"... you're not there yet. At all. Forget it. Get real.
How many reviews do you need to write about films that are not accessible to your readers anywhere??? How much self-indulgent noise should a Dan Kois make about Meek's Cutoff, a movie that is hardly pushed down the throat of Americans, in only 45 theatres (0.1% of available screens, while The Hangover part 2 gets 10% of them!)??? Are you out of your minds? A measly 45 screens of Meek's cutoff lost in a landscape of 40000 screens across America is what scares the shit out of you??? Let the "slowish films" in peace! will you? They do not deserve this amount of exaggerated hostility, they are not threatening the hegemony of lowbrow American culture yet.

We can notice that the English-language "slowish artfilms" get automatically more screens than their non-American counterparts. This is normal. Even at equal quality, the native language, the familiar actors will always draw more local audience. We expect the discrepancy, to a certain extant... But giving systematically 1 to 6 screens to "challenging foreign films" is a disgrace, plain and simple, especially in the country owning the LARGEST number of screens on the planet (more than China and India!).
How come they have less room for these films than France, a country 5 times smaller in population and with 7 times less screens (5426 screens total = 14% of USA total)? This is laughable. This is national isolationism at its worst (because it is not enforced by a repressive regime, it is entirely VOLUNTARY!). This is an insult to world cinema. Especially when the rest of the world opens more than half of its screens to the lamest Hollywood blockbusters all year long, providing twice as much revenue to the USA than Hollywood's own distribution at home. But America does not give back. Yes, a handful of screens at the time for the cream of the crop of world cinema, almost out of spite.
That's what the ungrateful America does. And American critics don't give a fuck, as we can read every week in the American press. For how much longer will the world endure this cultural embargo?
Meanwhile an ill-conceived patchwork posing as a slowish film such as The American gets projected on 2833 screens (7%)! It is just as slowish, wordless, uneventful, "boring" as the others on this list... Are you suggesting that Clooney alone makes all the difference to overcome the American-brewed aversion for "non-speedy cinema"? Does he get such a bigger appeal than Brad Pitt in Tree of Life? This is bullshit.
If most of these films are objectively hard to market to the regular movie-goer, it is not the case of them all. Poetry, Certified Copy, Winter's Bone, La niña santa, Ten, Yi Yi are perfectly identifiable "melodramas". You cannot invoke obscure cerebral inability to explain why American viewers are doomed to doze off in front of these films. Being lazy, unfocused, distracted, tired is no excuse to refuse to discover some of the best films made in recent years, across all genre and categories. They are magnificent and their story is certainly emotional in the most accessible way. Don't tell me there are only a few thousands people willing to watch these films throughout America! This is a big fat joke and you know it.
How could you call yourself a "critic", let alone a "cinéphile", and not be moved by this situation, and move you to dedicate your job of film critic to the education of American film culture until this kind of films start to get the respect they deserve???
This country and it's so-called "film culture" is hopeless...