Seen on the Web screen : A Girl and A Gun (George Fasel) 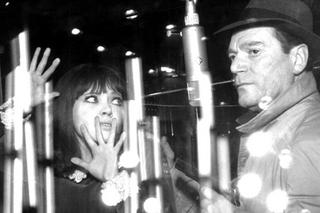 I've discovered George Fasel's cinephiliac blog only recently and too late. He passed away on August 20th 2005. RIP. His family keeps his blog going and here are his notes on a project of Memoir dedicated to his visits in Paris during 40 years. A very interesting read. Both for his passion for the city, mainly through cinema, history and politics, and for the pre-production aspect of this interrupted project, like a preparatory sketch, with a suggested plan, questions raised, doubts and awareness of a need for originality in this form of writing.
I've only been living in Paris for 13 years, though I'm french so the icon of our capital had a strong influence on me from my southern town. Nonetheless I understand how his constant connection to the spirit of the city could develop a more acurate sense of observation than any parisian living there all year long. It's only when we're away from what or who we love we fully grasp the personality we cherish. The foreigner's judgement has also a certain truth it takes decades for the native society to assume. That's how the Cahiers critics discovered a neglected side of American cinema for example.
I like his topical partition in chapters leaping through time anachronisticaly, to put together various cultural bricks that built the social identity of parisians. This multicultural approach echoes one of Bazinian essays.
This is a book I wish I could read. Maybe we'll get more drafts of this project published on his blog.
I'm not familiar with this Richard Cobb he cites though... any book on Paris he wrote I should read?
Publié par HarryTuttle @ vendredi, septembre 23, 2005