The Piano Tuner of Earthquakes (2005/Quay) 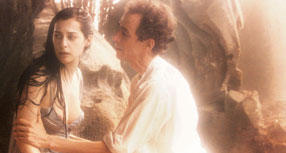 The twins were supposed to be in attendance, but since the film is shown in Toronto at the same time, they prefered Canada... Amira Casare, who plays Malvina the Opera singer in the film, was there to replace them. The film is produced by Terry Gilliam with British, French and German funds.

Based on Argentine writer Adolfo Bioy Casares' "The Invention of Morel". On a strange island inspired by XVIIIth century aesthetics, Dr. Droz , a mad scientist who pursues the dreaded quest to immortilize the perfect moment, the perfect sound with curious automatons. A baroque conglomerate of various myths from Pygmalion to Frankenstein, in a Raoul Ruiz-like psychanalitic re-enactment. All the story seems to be inspired by the Opera allegory of a naturalist factoid: This ant living in the forest of Cameroon is parasited by a microscopic fungus damaging it's nerveous system, leading the disordered insect to climb high up on a stem and die hanging out up there. The fungus grows a spike through the ant skull and ejaculates a spray of spores to parasite more ants down bellow.

I'm not sure yet if I prefer it to Institute Benjamenta (long time since I saw that one), I'd say this one is as loose and as experimental. Getting into the film is rather difficult, the first hour seems to struggle aimlessly. The lighting quality, often too dark to see, is uneven throughout, from glimpses of marvel (like in their short films), to dull pitch black.

The issue is once again a flawed acting direction, maybe too neutral, uninvolved in the peculiar universe of the fiction. Although it might be a conscious deliberate decision, I can't really pin down the essence of the mood they develop. But the visual proposition, free of any known conventions makes a worthwile trip, despite the long stretches and weak plot-descriptive dialogue. One character actually says it out loud "you'll get used to the confusion"

The last reel is extraordinary. The dream sequences are especially experimental, with reverse footage, stopmotion animation and a multilayered soundtrack.

The twins are indeed here at the Toronto fest. I would like to have heard their comments after the screening but I had to rush to something else. (I also saw them in the audience at the premiere of the short collaboration between Isabella Rosselini and Guy Maddin, My Dad is 100 Years Old. No surprise, really.)

It's been a while since I've seen Institute Benjamenta, but this story seemed like a similar excuse for a character to be locked away in a place with strange sights, where "things are not what they seem" (as I believe he actually says, in voice over). It's a lot of work for the viewer, but I was glad that some of the story involved automatons -- you'd never find an automaton repairman in the yellow pages so you might as well hire a piano tuner -- so the glimpses of Street of Crocodile-esque machines were great.

My favorite bit of dialogue: "You took my whistle. And my essence." "Did you think me incapable?" "But I might need it."

And the narrative drive of the finale really surprised me. The movie plods along archly, at a snails pace, and then turns pretty spectacular in the end, although I couldn't tell you what actually happens to save my life.

Hi Robert, I'm glad you found you way to my new blog. :)
You're right about this archetype of the naive observer initiated to an awkward universe.
Like in Benjamenta, This feature is also populated of odd sexual behavior and symbols, maniac choreography, the teacher/trainee, master/servant relationship, converging towards a certain conditioning of people according to one demiurge's utopia.
Actually the Quay brothers express their fantasy of creator, being allmighty rulers who risk (or desire) to be overthrown by their puppets. It seems very biographical, and maybe what fails the story is the lack of a coherent abstraction of their concerns they apply a little too literaly.
Individual scenes are amazing, but the cohesion of the whole hardly finds its evidence and its credibility.
They should develop a more atypical acting style, and work on a solid feature-length storyline to achieve absolute greatness.

I have yet to see Street of Crocodiles... The one I saw: In Absentia is magnificent!