Opening Sequence: A woman stands in the middle of the road next to a suitcase, looking to the right. Behind her is an israeli checkpoint, with barbwire, concrete blocks, watchtower, soldiers and armored vehicules. She walks under a concrete tunnel where a fully equiped soldier checks her ID and search her suitcase. No words exchanged, they are both used to the procedure, but a stare game keep tension between them, a mix of fear and pride. When she retrives her ID and walks away the frame reveals another soldier further back, behind sand bags, who was pointing an assault rifle on her head all along. 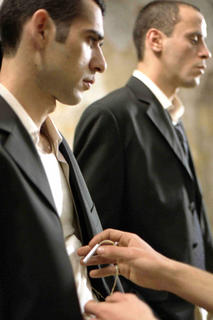 Nablus, a city under siege in the Palestinian occupied territories of Cisjordan, North-East of Jerusalem. Polluted water, supply shortage, black market, poverty, social class gap with Israeli colons, blocked roads, bomb explosion... Saïd and Khaled are 2 friends working dispassionately for a car repair waiting for their moment to play a role in the terrorist guerrilla against Israel. Khaled is determined and proud to sacrifice his life for the cause. Said is more introverted but confident. His beliefs are shaken as he meets with Suha, daughter of Abu-Assan a famous martyr, just arrived from France. In a secret and meticulous ceremony, Saïd and Khaled are straped to an explosive belt for a suicide operation in a Tel Aviv bus. The conservative religious patronizing of the instructors comfort the young soon-to-be martyr with a moral high-ground over the Israeli, and keep on reminding the Koranic quotes that leave no choice but to kill the most Israeli civilians as possible. The insidious lecturing covered by religious views overwelmingly imposed to uneducated and desperate men brought to the boil. However things turned out bad and one of them get lost on his own, searched by the israeli military and the terrorists who suspect a betrayal.

This hazardous premise of a walking bomb hanging around awry within Naplus instead of Tel Aviv highlight a new perspective on the impredictability of Kamikazee who can blowback rapidly, and also demonstrates at length the way terrorism hurts foremost Palestinians who live in fear. Collaborators, both Palestinians and Israeli, is another topic developped that feeds the circular escalation of violence and public shame. This unilateral depiction of the conflict leaves the Israeli out of the picture, although a guilty controversy opposes 2 sides within the palestinian protagonists. The diplomatic, life-saving, dignified, peacekeeper hope and the revengeful, terrorist, eye-for-eye retaliation, both defended honorably, that we can hardly judge from outside.

Remarkably dramatized in a succession of encounters and discussions, sometimes edging with the paranoid atmosphere of The Battle of Algier, the choices of scenes and the direction stay away from what this type of action-suspense movie would propose, and present an ambivalent situation without taking side nor judging the agenda. Overall the question raised is not whether violence is justified, but whether the oppressed people has the luxury of a moral choice at all.