Finally found some data on Chinese film production (a 1949-86 study). Pre-1949 films still wanted though, as well as 2 periods : 87-94 and 98-05.
If these figures are correct, it wasn't as large as I expected. However few come out to our markets, they are no competition (in size) to India, EU, USA or even Japan, contrary to what I assumed from the most populous country.
But it produced a greater number of educational/scientific films (5000) and documentaries (12000) between 1949 and 1984, mostly for propaganda purpose.
Note the dramatic "shortage" during the "Cultural Revolution" repression. Recently it is growing to a better shape according to China's population and economy. 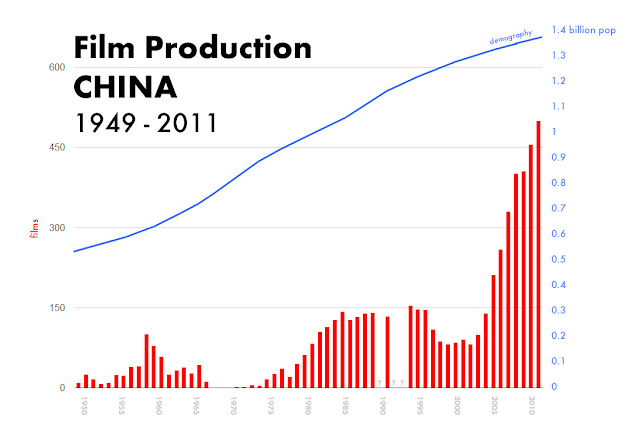 related : trailer of the latest Chinese blockbuster commemorating the 60th anniversary of the Chinese communist Party with a casting plethora : The founding of a Republic (Sept 2009)

and if you know where to find more data on Chinese film production, please be kind to share.

It wasn't merely a 'shortage' during the Cultural Revolution; *no films* were produced for a period of three consecutive years (which it is kind of difficult to see in the graph). Here are some annual numbers as per Paul Clark's study:

Thanks Michael,
you're right, it didn't occur to me the zero appeared in red there. I should erase these columns.
Shortage was a bad choice of word too, it's more a suppression/censorship of cinema.

EDIT : graph updated, and all the detailed numbers are available in my spreadsheet (see link in post)