I only found data from 1931 to 1993, and only 2 years since then (2003 and 2008), but it gives a good idea how the Indian industry developed. Hindi films (the Bollywood standard, although Mumbai is in the Marathi region, but Marathi cinema is very small) clearly dominate the market, but is hardly the totality of Indian cinema as you can see. I have represented here the 8 main languages that produce the most films, consistently. The survey I used lists 51 different languages! (including English, German, Farsi, Arabic, Thai or Sanskrit, though only a single digit in total)
The production quantity really exploded since the 70ies, and it is growing again rapidly since 2000. It seems out of control.
In the early decades of talky cinema (under British rule), many regions without their own industry opted for Hindi and made their films in Bombai. And lots of films were made in native language with a Hindi version for the pan-Indian market.
The Indian Independence (15 August 1947) boosts Indian cinema as a whole and regional cinemas. Satyajit Ray opens auteur cinema in Bengale in the 50ies, for a while. In the 70ies, Kerala (Malayalam language) becomes the region of auteur cinema, with Adoor Gopalakrishnan and the New Cinema.
In 1968, Telugu film production overtakes Hindi film production for the first time.
In 1979, Tamil film production overtakes Hindi film production for the first time.
Since the 80ies, 5 industries seem to compete for the top ranking : Hindi (Delhi + Mumbai), in the North; and in the South : Tamil (Madras-Chennai), Telugu (Hyderabad), Kannada (Bangalore) and Malayalam (Trivandrum), each with a powerful film industry and studios of their own.
In 2008, Bollywood made more Hindi films (around 600, not even half of all Indian films) than Hollywood made American films (520)! Unfortunately the financial success/flops ratio is worse than in Hollywood. The production cost remains inferior than in Hollywood though and the B.O. returns are much larger.
What everyone calls "Bollywood" is in fact a series of regional cinemas, with an individual production more proportional to what we see elsewhere in the world, around 200 films each (except for Hindi recently) per year. Though they all make mainly Masala films (Indian musicals). Regional cinema and art films struggle to survive within a commercial market overwhelmed by a single standardized formula of self-censored romantic dramas containing 5 to 10 choreographic routines.

This next picture shows the important milestones and historical dates to make sense of the ups and downs of these graphs, also a few landmark films. 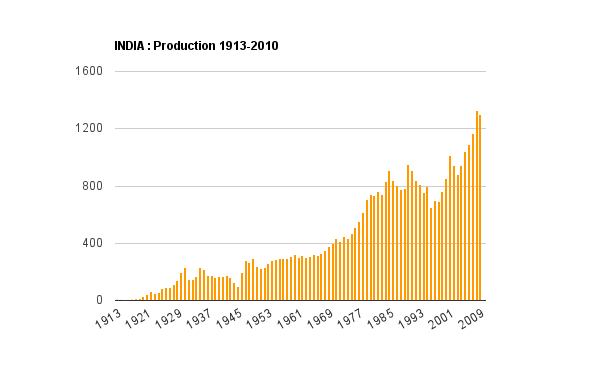 The graphs and your timeline of highlights are fantastic! Thank you for such an important resource.

Brilliant graph - can be used as an ultra fast crash course to Indian cinema industry. Thanks...

Amazing, Harry the whole series is really exhaustive and helpful.

Thanks guys. Yes this is a brief overview for Westerners to whom Bollywood is a mysterious blob.

related:
The Indian Film Industry by venicelion (24 August 2009) at The case for global film

Thank you for the help with the timeline too, Nitesh.