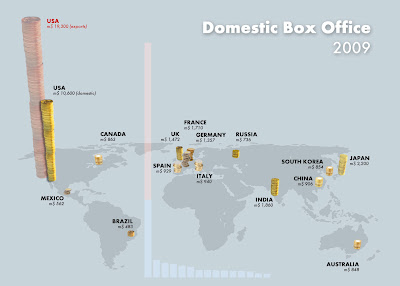 There is Hollywood running an industry with $29 billions of BO revenue.
And then, there are every other countries in the world, struggling to make ends meet with around $1 billion... and in most cases : less than $200 millions a year (without even reinvesting all this money back in their own films, since the largest share of domestic BO directly goes to Hollywood). Can you see a problem in the balance of the global industry now?
Even among the most conservative Hollywood lovers (who are aware of foreign cinema!), it would pain me if anyone found this financial situation to reflect the actual value of Hollywood cinema in comparison to any other non-American national cinema.
Do Hollywood films deserve to get the largest share of the cake, the top spot? Probably, yes. For a combination of mass appeal and an undeniable academic professionalism in their production.
Now, do Hollywood films deserve to get over 30 times more admissions in the world than the best European industries, and up to 300 times for the smaller, yet more creative, Asian or Latin-American industries... Is a Hollywood film really 30 to 300 times more universal, more appealing, more commercial, more populist, more entertaining than ANY other mainstream film in a non-English language? Let alone the comparison on an aesthetic level.
How can you produce/distribute competitive films on the commercial/international circuit with 300 times less BO revenues??? Come on...
Sorry, I do not think the quality of the "Hollywood system" and its star factory alone could justify such a monopoly (lockdown) of the global cinema circuit, blockading any cultural exchange and the prosperity of local industries. This is not solely due to the "free market". There is more than star fascination, big budget, special effects and entertainment, to "force" moviegoers to systematically go for the Hollywood flick instead of anything else. This monopoly is aggressively engineered by informal regulations and isolationist mentalities, against what the natural/free choice of the crowd under normal circumstances.
And any true film lover shall seek to elevate the average film taste, educate the consumers by all means, and get the system to accept more diversity, more respect for a DECENT MARGIN reserved for art films (that nobody wants to see) even if it is not PROFITABLE, for the sake of world film culture.
Related:
Source:
Publié par HarryTuttle @ mardi, juin 01, 2010

I'm willing to admit that Hollywood is 300 times better at MARKETING its products, but nothing more than 2 or 10 times better at making mainstream products. Even if we only talk about "populism", "escapism" or "universalism"... over 20 times better would be an overstatement by any stretch of the imagination (even if you hate art)!
The overshadow of Hollywood cast on the rest of the world, would make us think that other cinemas are inexistent in comparison, and are incapable to share cultural products with other people...

In a global village, if there is a good film made anywhere, it should be given the same chance to reach blockbuster level. Unfortunately, only a few industries are "allowed" to promote a commercial outside of their original market. And Hollywood makes sure that the local industries don't get too greedy (meaning having the ambition to get more than 50% of their own domestic market!)

When you make that MUCH MORE at the box office than anybody else out there, you'd think that you'd be a little less aggressive about your competitive edge, about breaking quotas overseas, about keeping out foreign films...

Are there experts out there who think that Hollywood could stop ruling the world if the gap between them and the next competitor would be any less dramatic???

If smaller countries can survive and continue to make films without holding 95% of their own domestic market, and still manage to run cultural programs protecting diversity and cultural exchanges with foreign nations... I think it's safe to say that Hollywood can do as much, if not MORE, with the Gulliver position they are in (see above).

Hollywood, you can do better than this. I don't mean waste more money on futile stuff. I don't mean make more profits and steal more viewers to your "competitors". I mean you can find small ways (and greater ways) to improve the global balance.

When you're in such a dominant position, usually you're considered a "patron of the arts" and you can throw "peanuts" at other nations without even counting. If only, for the publicity stunt that would give you a shiny image of cinema liberator.

"Exposure of the multi billion-dollar gravy train enjoyed by media executives would be a shock to stockholders and the public. All would see that the inflated production costs are not due solely to a few highly paid actors. Raking money off teh top, bouncing revenues and expenses between TV stations, cable channels, ancilliary markets and numerous overseas machinations would be open to question. Enough slack exists to allow for creative bookkeeping practices that would baffle even Arthur Anderson's successors. Hollywood Creative Bookkeeping is a picture they hope will never be made or shown."
Western Region Residency Requirements Relaxed for Eastern Region Members; in Viewfinder 1, #4; Haskell Wexler; 2002