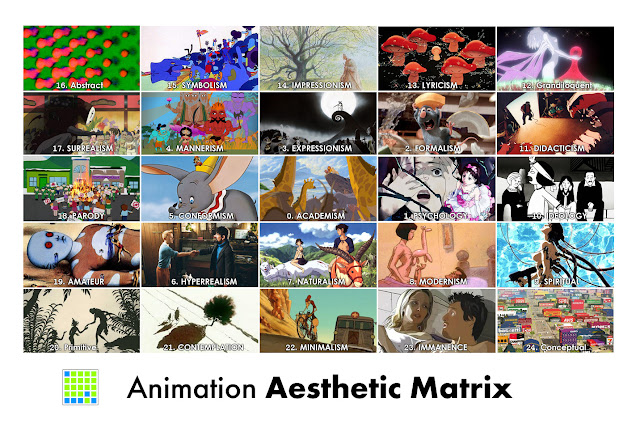 On the Cinema Film Style Matrix (which encompasses all cinema : animation, documentary, experimental, artfilm and mainstream) the territory of animation would only occupy a small area around Amateur, Parody, Conformism and Mannerism (simply because their aesthetic is not realistic compared to any live action film with real humans). Because they are an intentionally stylized representation of reality, a higher degree of artistic interpretation more dramatically different from what we are familiar with. But here, I'm only taking into consideration Animation itself (albeit excluding stop-motion and puppets for consistency), and remapping the aesthetic film styles within the subcategory of Animation, to distinguish the diverse sorts of tracing, technique, verisimilitude, anthropomorphism, as well as narrative structures. And there are great many ways to represent animation indeed, as we can see.
Also, an important detail to note is that animation is mostly embraced by the mainstream consumption. They are almost always made for a mainstream audience, and conversely, the audience is open a lot of different styles, switching from one to the next, without flinching even, because they are all cartoons, or animated film, whether they are in Black&White or Colour, old or new, linear or surrealist, melodrama or quirky stories... The only box that would remain in an elitist niche would be abstract animations (Len Lye, Stan Brakhage, Oskar Fischinger, Viking Eggeling, Norman McLaren, Peter Kubelka, Man Ray, Marcel Duchamp, Fernand Léger), these are clearly not appealing to the mainstream public. But even the conceptual animations, like the last segment of Fantasia, Dali's Destino or many music videos are still accepted and appreciated by a mainstream audience without any highbrow cultural education or elitist taste.
This is an interesting lesson that Animation teaches us. Some Japanese Anime have quite an experimental narrative structure, with incomplete story lines, drastic cuts, chaotic action, not to mention the hardcore fans watch Anime subtitled, in their original language! And yet they are pretty popular, even within the very mainstream audience. It doesn't take intellectuals, elitists, snobs, to be OPEN MINDED about foreign cinema, artistically varied styles, complicated and serious stories! Even the old classic animation remains popular and accessible, unlike live action films where any film older than 10 years is considered prehistorical and elitist and obsolete... Today, the popular area of mainstream cinema is restricted to the off-center of the Matrix (Academism, Conformism, Parody, Mannerism), everything else is considered "INACCESSIBLE"!!! WTF? Anything that used to be mainstream in the past (like Expressionist Hollywood, like French Impressionism, like Modernity, like Neorealism, like Hollywood Psychology) are avoided and trashed by today's audience... just because they are not as fast-paced, or dumbified, or shiny as today's trends. Black & White is rejected for being outdated and snob when it is just an aesthetic choice to give a particular tone to a contemporary film.
Why is there this discrepancy between what the animation audience is ready to embrace (and most of their target audience are children) a greater variety of visual styles, narrative styles and directing styles, and the narrow-minded comfort zone of live action mainstream cinema? Maybe children are more tolerant and open-minded, and mainstream grownups are lazy, conservative, complacent and apathetic...

Films used as illustrations for each aesthetic category :

"Given Disney’s long history of preferring representational art, its embrace of CG animation was a given. Other Hollywood studios also have embraced CG animation as more efficient, and the heavy promotional arms of all the major studios should ensure that public tastes will be shaped by the proliferation of regularly shaped geometric forms.

Perfectly formed spheres and utterly straight lines—even flowing strands of hair as can be found in such films as Final Fantasy: The Spirits Within (2001) and Brave (2012) have perfect curves—create a kind of sterile hyperrealism within the most imaginative story and have a tendency to dull the visual palette. Constantly viewing images made of perfect lines perfectly filled with color, even nature-defying color, creates a generic conformity that undermines the individual visions that can be found in pre-computer animation. [..]
The question audiences have to ask is what do we want from animated films? Do we just want eye candy, intense colors and perfectly formed clown fish and toucans that show the human power to recreate nature to the smallest detail? Photographers can capture reality easily enough, but often choose to create blurred, superimposed, or textured images that can disturb, enlighten, and inspire viewers with an original point of view. [..]
Mainstream animation, now almost exclusively employed to make films for children, is offering a vision of the world today that promotes coloring inside the lines. I personally don’t think that’s a good thing. [..]"
Coloring Inside the Lines? CG or not CG: conformity vs. creativity in film animation. (Marilyn Ferdinand; Fandor; 21 Feb 2013)