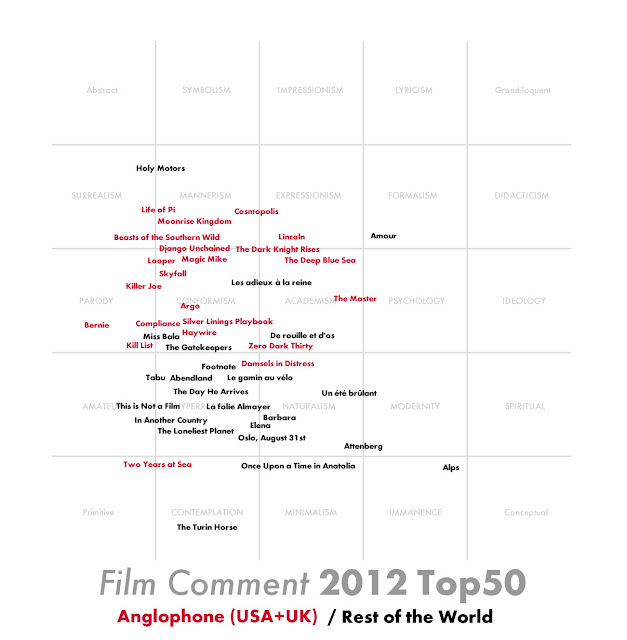 When you map the supposedly "Best Films of The Year" (according to Film Comment, and to whatever Hollywood distributors agreed to back up) on the Academic Matrix of the main aesthetic categories, you realise, first that they are almost all concentrated in one quadrant (much less diverse than the S&S 2012 Top50 of All Time Canon), and a very distinctive separation emerges between anglophone (indie) films and the non-anglophone films.
Firstly, this selection of "Best Films of the Year" aren't very far from the Academic core, the classical way of making movies. Hollywood's own center of gravity is located in the "Conformism" box, the mainstream, classical, conservative way of storytelling. The more state-of-the-art classicism is in the next box, the center of the matrix : "Academism" itself. Away from the center are more diluted version of this academism, and in the margins are the more stylized, formalist, realistic, or experimental.
American cinema and more generally Anglophone movies usually conform to a very classical narration, stereotypical plots and tame form, even when they claim to be "indies". As you see, except for the handful of actual mainstream blockbusters (see the distribution numbers here), the American films ending up on a Year-End Best-Of, for American reviewers, are usually so-called "indies", because they are perceived to represent the more "artsy", less commercial, less profit-driven part of American cinema. That's the category celebrated at Sundance or Telluride, and the one nominated by the Academy to represent the "quality" side of American cinema. Although everyone knows they are made in Hollywood too, most of them funded by the same producers/studios (under different divisions and names), and the "indie" filmmakers themselves only dream of making an imitation of the traditional feel-good Hollywood movie to appeal to the masses but with "quality" and "feelings". On this map we can notice that they never stray off very far from the Hollywood formula.
The American films (even the Year's Best Of), is mainly classical, with a tendency toward "Mannerism" (i.e. the more stylised theatrics) and another one toward "Parody" (which is not solely the realm of pastiche but more generally the light (or lowbrow) genres, more geared for entertainment... These are not lower forms of filmmaking per se, as evidenced on the S&S Canon matrix, or La matrice des montages, where critically masterpieces and great masters operate and succeed. Notable exceptions : a couple films this year venture in surrealist territory to offer quite a disconcerting storytelling : Life of Pi and Beasts of the Southern Wild.

On the other hand, the films from World Cinema selected by American critics are not the "Best Of local indie production", they are generally high-profile productions, sometimes even mainstream in their local market, and most often, more than just the struggling artsy independents from their respective countries, they are the grand standing films that competed on a planetary level, with the best of what each country had to offer, within the elitist scene of (major) international film festivals. And the result, is farther away from classicism. What Americans (and Hollywoodophiles) name "festival films", or "slow films", mostly come from the bottom-left quadrant, centered around "Realism" and "Hyperrealism", the new trend of (actual) independent cinema in the world. They are more INDEPENDENT stylistically from the major production of mainstream studios.
And this might explain why the "Hollywood patriots" tend to complain about festivals that favour this hyperrealistic trend (and label it in the most possible pejorative manner) and neglect the more genre driven theatrics of American storytelling. Thus the divide between an American conception of how "indie" cinema should be, and how independent cinema is in the rest of the world.


Gavin Smith introduces (timidly) the results with a caveat about the "concensus" aspect of such poll (solely reserved to American reviewers) and also acknowledges the fact most of these titles premièred in Cannes and other major festivals! Flashback to January 2011 (see Without Festivals) and February 2012 (see Critical Fallacy #13 : Inconsistent Standards)... Did they wait for me to tell them that the job of film critic was to issue opinions that are consistent with one's own practice??? I hope not, yet, it's only in 2012 that they discover that, maybe, it isn't so smart (or productive) to lambast foreign festival all year long when you draw ALL YOUR BEST FILM CANDIDATES for your Year-End list... Sigh. At least, when we start on the right foot, by being intellectually honest and objective about the formation and the function of such polls, we can have a reasonable conversation about stylistic trends, quality, and taste, whatever the winning titles are.

Anyway, the chief editor continues by expressing his reluctant endorsement of this poll (as usual! see: Double-Standards) since he doesn't feel his taste is represented by this (undesirable) "consensus". Be sure that if his favourite picks were at the top of the list, he would find this poll the most awesome expression of democracy... Bias and double standard WIN! He's one of the reviewers who prefer fun and entertainment (Dan Kois, Mark Cousins anyone?) and still want to cheat their way into serious "artfilm" circles (they want adult cinema, political stories, historical documents... but not so damn depressing! with a bit of zaz and laughters between the bodycounts of human tragedies for fuck sake!), and lead a team of editors at Film Comment that contradict his taste. Nothing wrong with a mainstream taste, or for preferring plain entertainment (as an individual movie goer speaking for him/herself), but when you claim to give an educated opinion on the state of world cinema as a whole, on the achievements of the best filmmakers, on the important documents, you can't underestimate the standard difference between easy leisurely distraction and the more resourceful accomplishments made in a whole different level of filmmaking. Maybe the mass won't approve, and you won't have as much fun as watching bodies being dismembered in slasher flicks, but serious drama and documentaries take more efforts to make and critics are there to acclaim hardwork, not primary-instinct-based spectacles, however successful they are...

This said, and given the state of the artfilm niche and the moribund cinephilia in the USA, the results of this poll aren't so bad. Well, they do boost a lot of mediocre American spectacles (that are merely the best of the entertainment industry, or in other terms, well-made spectacle, which appear as masterpieces when compared to the majority of Hollywood approximate productions).
It is certainly unexpected and cause for congratulations that a UFO like Holy Motors tops the list of the American cinephile taste, accompanied by This Is Not A Film (#4), The Turin Horse (#6), Tabu (#11), Attenberg (#25), Two Years At Sea (#38) and Alps (#45). They are not totally useless (even if their "shut-in DVD complacency" gave up on artfilm theatrical projections), and they know when to stick their neck out, in spite of the threat of "elitist" namecalling from the mass of their readers, in support of challenging artfilms without commercial appeal and little narrative tradition to hold on to for the average moviegoer. Let's ignore the fact they list alongside, in the same breath, laughable spectacles such as Bernie, Argo, Looper, Skyfall,  Haywire, Compliance, Kill List, and The Dark Knight Rises... which would be enough to question their understanding of world-wide quality standards (maybe these are the best you've seen all year on your Hollywood-control market, but there are dozens of artfilms that popped up on the festival circuit this year that are ignored, even by the "undistributed list" addendum! For instance, Faust was on the unreleased list last year, and this year has been forgotten, both by voters and distributors...

For comparison, Cahiers' 2012 Top10 (according to France releases):