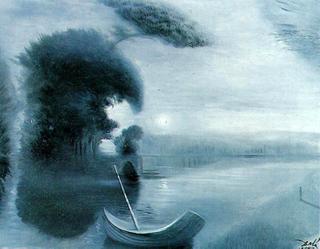 Metamorphosis of Hitler's Face into a Moonlit Landscape with Accompaniment, 1958

Homage to Impressions d'Afrique (1909), a free-associative poem written by Raymond Roussel (1877-1933), even though he never visited Africa. The film is dedicated to this french author, forefather of the Surrealists, who developped a formal constraint system to generate inspiration from dislocative puns.
Dali does the very same thing with this chimerical pseudocumentary leading us to the mysterious realm of High Mongolia where a gigantic, soft, white mushroom grows, many times more hallucinogenic than LSD! From his studio-museum in Cadacès (Spain), he proceeds to report with fake newspaper clips and newsreel on the alleged scientific expedition sent out by himself to retrieve this precious treasure. Childhood memories (like the picture above) are the opportunity to explain throughoutly the source of his inspiration. This bucolic landscape is in fact a close up of Hitler's portrait (his nose and moustache) turned to the side!
Wholly daliesque, this film experiment pieces together astonishing combinations on superimposed images, fading in and out, switching scale with odd perspectives. Dali invents a filmmaking process and applies his very language to cinematic purposes, bending the rules to serve his desperate need for originality. Travelling through a microscopic close up of paintings or the rough surface of a pen, his voiceover commentary gives sense to the landscapes taking form under his eyes. We get the chance to see some of his art, and watch the artist being his egotico-paranoid self (in French). A delirious experience, beautifully crafted. The backdoor to Salvador Dali's twisted mind.

This brought back fond memories of spending time staring at abstract motifs on tacky wallpapers, marble tiles or on geometrical rugs, discovering unmistakable faces and curious monsters or animals, that would later stand out everytime I'd lay my eyes in this area. The mind always tries to rationalize in an anthropomorphical way an image devoid of meaning, lacking recognizable features. The same game as discriminating shapes in the cumulonimbus. And suddenly we blink for a second and it's all gone, impossible to spot it again like it was before, even though we know it's right there before our eyes. I used to trace them over, as it was a rich generator of original shapes, but it never looks as real when the hand "improves" by filling the blanks on paper, adding a missing eye, or connecting dots. The creature emerging from a stain appears genuine and evident in its alien context only. Dali operates the same doctoring by overlapping his drawings on the footage to hint us how to read his vision. Then he takes it away and let our imagination build the rest, like a collective visual palimpseste.

Am I wasting my time trying to find a copy of Impressions De La Haute Mongolie? Has it ever been released? If anyone can tell me where to get it, that would be fantastic!

I believe it was originally released in Germany. But even thought it's a French-speaking film, it's not available in France.
You should try to download it online (eMule) ;)

Thanks for your help and info. I have downloaded it online already but I want a copy on disc . I will keep trying. Thanks again .

I saw it at L'Etrange Festival (maybe you could contact them to ask) back in 2005, introduced by the filmmaker Jose Montes-Baquer, but I can't remember now what he said exactly. I think he said it was a very rare print, and it wasn't visible otherwise, and rarely projected in public at all. Maybe it was picked up by a distributor since... I wouldn't hold my breath though.

Hi Harry,
Thank you once more, you are a great help and I apprieciate your info and time. I've e-maiiled them to find out. If you think of anything else that I can follow up I'd apprieciate it.