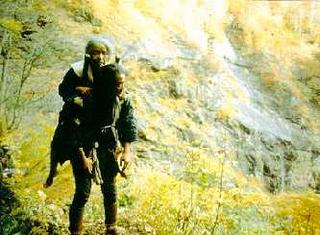 Great rendition of primitive social life in a remote community struggling to survive amidst an ungrateful Nature. Morality becomes meaningless when confronted to the call of starvation, primal instincts take over and balance quickly between murder, infanticide, trade of babies, rape and survival of the fittest. Shots of animals hunting, eating, mating and giving birth are recurrently inserted to illustrate the close parallel between these humans and the soulless behavior in the wilderness. Personally I thought these naturalists pictures came of as a naive cliché after a while, especially because of the abrupt editing that fails to incorporate them fully in an aesthetic unity.
A small village of a dozen families lost in the mountains is confronted to many moral decisions around the year, as the harvest go thiner and the neighborhood overcrowded. Baby girls are sold for food. Baby boys are killed at birth, and if they live out they are paria, treated as underdogs by their own family because only the first born son will inherit the ancestral property thus be able to mary. Eldery reaching 70 yold are kindly transported to the snowy mountain top comes winter to spare the burden of feeding people who can't work in the field. Superstition and fear of the dead spirits overwhelm their daily activity, paying homage to ancesters with prayers and begging for mercy. It's the ideal freudian field study: one takes out father and mother, one wishes his elder's death to climb the hierarchy, one asks his daughter to be a whore, one sleeps with the neighbor's mother...
Onin, a 69 yold grandmother is at the head of a large family shamed by too many humiliations... Her husband refused to abandon his mother in the Narayama mountain and deserted his family. Her elder son's wife died giving birth to a baby girl. The heir son isn't married yet. And she has all her teeth in healthy shape, which is a shame for old people, like if they pacted with the devil not to die, which means they remain a burden longer than normal.
Unfortunately only the story is strong, the performances are exaggerated, theatrical, often too grotesque while they should have been more interior and instinctive. Towards the end the film becomes interesting aestheticaly, with a few unspoken scenes as life goes on after a serie of inhumane tragedies. I'm probably most disappointed because of the recommendations I had heard. A weak Imamura in my opinion, style-wise, the direction is rather flat. Palme d'Or at Cannes 1983 anyway...
This depiction of humanity dregs simmering in a closed environment reminds Kurosawa's Lower Depths (1957) and Dodesukaden (1970). Recently a first time japanese director, Hiroshi Toda, developped this theme of the multigenerational nucleus family in Snow in spring / Shunsetsu (2004), taking place in today's Tokyo and abandonning the senile father in the mountain top is also a cultural solution for this middle class urban family. This film however is commendable.
(s) +++ (w) ++ (m) + (i) ++ (c) ++
Publié par HarryTuttle @ lundi, octobre 17, 2005

I was going to suggest Kinoshita's version of the Narayama tale, but that's even more (kabuki) theatrical. :) I think we're generally in agreement though (although I liked this film a bit more than you, I think). I find Imamura's version more desperate and inhumane (grotesque is a good word), but also more pantheistic while Kinoshita's version is more humanist and hermetic. I think the core difference is that Kinoshita tries to drive home this sense of blind and cruel duty (as a metaphor for the atrocity of the Pacific War) while Imamura's theme is towards a more universal baseness of human behavior (I know that the U.S. was just beginning to come out of the recession at this point, so it may have been a similar economic situation in Japan). So in that sense, Kinoshita's version sees humanity as victims while Imamura sees them as victimizers.

Thanks for the comment. After checking your review I thought you'd be in a stronger disagreement. Interesting to know about the distinction with Kinoshita's version, and it doesn't say I wouldn't like it more... The stagey aspect would be more coherent within a Kabuki direction than in Imamura's film on location meant to be realistic.
The color was too high-spirited and light for the gravity, I'm sure a B&W photography would correct this distraction I had.

I think you're correct about that black and white aspect probably enhancing this film. Imamura himself admits that his films are aesthetically "messy" (part of his anti-Ozu formalism rebellion), and B&W tends to be more forgiving. It's a grim story, so it's better suited to sombre colors. In general, I do think Imamura's films look better in black and white, with the only notable exception being Dr. Akagi which, uncoincidentally, is the most formalist and "Ozu-inspired" of his films.

To be honest, as much as I love Mizoguchi, I like his color films the least because of this "messy" distraction of colors as well.

By the way, I saw Imamura's version before Kinoshita's (which I only saw maybe 3-4 years ago), so the review reflects that chronology. I felt strongly about Imamura's film until I saw what Kinoshita did with it and realized how much more I connected with Kinoshita's view of the Narayama tale.

The ending in the snow or the brownish forest works better with a uniformized background.

For instance Kurosawa makes astonishing use of (non-realistic) colors in Dodesukaden, but it's coherent with the stylized intentions. It's exaggerated, stagey, lyrical and comical, but the atmosphere is successfully dark anyway.

I was wondering which one you watched first. I might like Kinoshita's version more too.
The pantheistic relationship was a great idea but looks anegdotical the way Imamura incorporated it. For instance, the animals are shot separately instead of placing them in a shot with characters (foreground or background) and it distanciate too much the naturalist environment (like the limitation of montage evoked by Bazin).

I think Ozu's color films are my favorites. Maybe it has to do with the atmosphere and the pertinence of the color scheme.

I saw another Imamura recently, A Man Vanishes in B&W. I loved it, not only a subtil montage pseudocumentary-style, and a really interesting reflexion on cinema truth.

My Bazin reference was meant to oppose action unity within a frame/plan, and artificial juxtaposition of two estranged universes. Maybe the limitation of what Darren called "parataxis" in his entry on "boring art".

For instance in the bird of prey scene you cite in your review, the wildlife is incorporated into the social life within the same plan, and it works best.
The snake "master of the house" moving around in the attics during the love night of Tatsuhei and his new wife is also an attempt to make the two worlds interract (even if this one is just an insert shot, there is a soundtrack continuity).

On second thought the print I saw was a bit old and maybe the colors had gone bad.