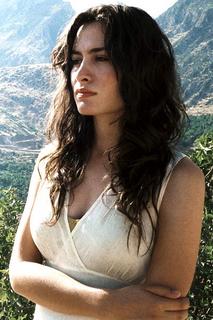 First movie shot in Iraq since GulfWar 2, Hiner Saleem (Vodka Lemon), exiled kurd in Paris, films a burelesque road movie in the backdrop of the Iran-Iraq war in 1988, coupling up together a kurd with an iraqi to highlight the absurd contradictions of a disparate people undermined by ancestral hatred. The film opens on a couple in a car driving in a country road of France, captivated by the radio announcing the laungh of the war in Iraq by president Bush in 2003. Cut to Iraq in 1988.
Ako is a young kurd married to a beautiful woman who refuse to leave the country without her dying father when the war is announced. They live in northern Iraq, in Kurdistan, bordering Turkey. Facing the dilemma of enrolling in the kurd resistance up in the mountains, or fleeing to Turkey, Saddam Hussein's army drafts him by force in the street, leaving him no choice to agonize over. Then sent directly on the frontline to the extreme south of Iraq, in Bassora, away from the Iranian Kurdistan. The film gets started when Ako is assigned the task to bring home in his Kurdistan the corpse of a martyr. His taxi driver with the coffin on the roof, is an taciturn arab, reduced to obey to a kurd by this ironic reversed situation where Ako is the one with the gun. Like in his previous film Saleem uses his trademark motif of a bed on wheels for comical relief, or the recurrant apparition of a giant bronze statue of Saddam on a truck. The hearses convoy can only use main roads or cross cities at night to save the population morale. Meanwhile the body decays and the 2 protagonists failed to connect in any way.
Desperately trying to reach the lightness of Kusturica when he introduces black humour in wartimes, Saleem poses a few staged situations to illustrate symbolically all the complexity of the tension in Iraq without ever showing it. The kurd genocide is briefly told through a radio speaker, fighter bombers only heard on the soundtrack, and smoke explosions on the front. This much minimalism could make good suggestive cinema if the scenes were less rushed and more sophisticated. The non-actor cast lacks the meaningful direction. The good ideas of mise-en-scène are clumsy and underdevelopped. Honorable intentions and limited means, but more jokes than actual inspiration.
This recreation of history is so disturbingly detached, brought to an intellectualisation of humiliation and suffering, that it's difficult to even believe in the fiction. Probably a lot of the subtext didn't hit me how it should have. A kurd saying concludes, as Ako and his wife are in a tiny rooftop appartement in Paris when Iraq is liberated by the coalition : "Our past is sad, our present is a tragedy, but fortunately we have no future."
Selected in Cannes 2005 (Official Competition)
(s) ++ (w) + (m) - (i) + (c) +
Publié par HarryTuttle @ mardi, octobre 04, 2005

This is the kind of respectable small film I would like to defend, for its subject and the political context. Although I was rather disappointed by the overtly lax direction. I should try harder to define what exactly hinders the success of the film, in my opinion, instead of this rough synopsis.
Maybe later.

Sorry, I left some negatives out, so the post sounded opposite of what I had intended it to. :o

Here's what I meant:

Heheh, I haven't seen Kilometre Zero but I had a similar sentiment when I saw Vodka Lemon that I should also try to write something about it (which I never got around to) because it's such a small film that it probably wouldn't get any press at all. It's a tough balancing act, trying not to overpraise what is a commendable, but flawed film, but also not putting it in the same level as a "well done, but unoriginal" film.

Vodka Lemon is equally disappointing in underachievement, but it was a family drama that didn't try to pretend to be an intellectual allegory, a funny mimic of Kiarostami.

There are interesting scenes like when the kurd and the iraqi stop the car to talk out the conflict between their people. Each asks the other to say the first argument because it seems to hot a topic to take the responsability to "throw the first stone". It sounds humorous and intelligent but its enactment on screen is poor.

It's easy to make this film sound great in words (like the Cannes praise did), but the images aren't as inspired.
I support the cause of the film, and even the independant cinema format, but it's the kind of underachieved movie that keeps people away from "artfilms" so no need to recommend them as "small gem".