A travers la forêt / Through the forest (2005/Jean-Paul Civeyrac/France) ++
Odd very odd, oddly cute though. A conceptual movie constructed in a rigorous formalism, 10 plan sequences of even timing tally a little over one hour, few protagonists, a narrow set and a soft accoustic soundtrack.

Opening sequence:
A young girl wakes up naked next to her lover in bed, walks up to a bright window and sings an english song. She hates her morning hair so asks him which hairdo would go well if she joined him on a trip to the USA. They joke about it and suddenly the sky goes dark, a storm has obstructed the horizon. The camera tracks her around the bedroom as she looks for her boyfriend who has disappeared, reframing from extreme close up to wide shot, back and forth, from bright light to dark corners, looking into reflecting surfaces or passing behind a flower bouquet, single-handedly commented by the girl's voice modulated accordingly through mood shifts. The light tone of a lovely morning has faded seamlessly into an anguishing evening, the playful game has turned into a bad dream. She's alone, distraught. 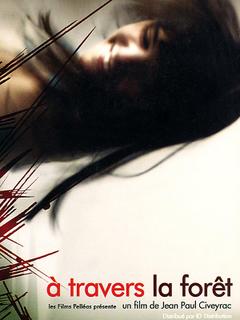 Armelle lost her boyfriend Renaud in a motorcycle wreck a couple months ago. He comes back in her dreams to make love to her like if nothing happened. Her two sisters strive to talk her out of this difficult mourning, either with an austere sermon or introducing her to spiritualism. Now she's convinced Renaud wants to come back and she interpretates omens anywhere. Hyppolite, a boy with a motorcycle leather jacket at her university shows a disturbing resemblance with Renaud. Armelle fantasizes a bound with the undead, like Orpheus she wishes to join Renaud in the afterlife and bring him back. The film even hints with subtle touches to the magical spells of her broken heart, mindbinding influence on the people around her. These compartmented tableaux passively observe slices of life unintrusively. The absence of reverse shots confine a 6 minutes lapse with the characters, like a micro theatrical scene. Since Armelle is almost always onscreen, the camera scrutinizes her face, and follows her steps, rarely lingering on the offscreen context wherein she evolves, plainly illustrated by distant noises. A claustrophobic camerawork leading the eye, essentialy focused on the actress(es), leaving no room to breath. Although the self-conscious enunciation seems theatrical, the scarce dialogue is mostly non-narrative, as if the girls-talk verbalization was a way to fill the silence and divert attention from contained inner conflicts. Thus establishing a dichotomy between images and words. Suggestive choreographed mise-en-scene that evokes ties to intangible presences. Aimless discussions around the vanity of human lives, like an ideal marriage to secure fate.
The premise confronts an imagined ghost or a representation of a spiritual quest, but far too straight forward and terribly naive. A style exercice that lacks some depth, unfortunately, to found the need for such ascetic mannerism. However the photography is the most developped aspect of the film, the ambiant lighting and the clashing colors.
Jean-Paul Civeyrac met Camille Berthomier at a theatre school and wrote her a film within a month. The debuting actress wrote all the songs she sings in the film.
Premiered at Toronto 2005
trailer (french)
(s) ++ (w) ++ (m) +++ (i) ++ (c) +++
Publié par HarryTuttle @ vendredi, octobre 21, 2005

I think Harry's been busy lately. :-)
Maybe watching a lot of movies...

Hi Girish.
Actually I've started too many entries and I can't complete any... of course they are piling up higher every week.
I'm not too happy with the blog format.
I'll try to post something shortly.

You didn't. I was on the brink of posting something again.
I'm too lazy to keep a daily diary...