After the October 2011 release batch in the USA, let's take a look at the other end of the distribution spectrum in France (REMEMBER: France is a country 5 times less populated than the USA, with 7 times less screens, and a lower average annual admissions per capita) : 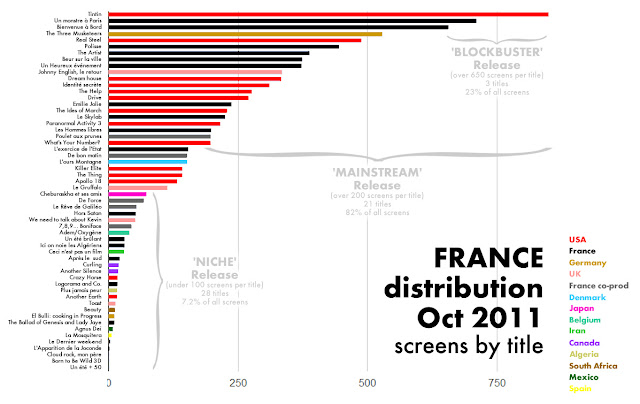 Note the drastic difference with the USA chart, where there was a strong divide between the huge releases and the "invisible" releases. Here we see the smooth continuous curve (the Long Tail consumers) from the "blockbuster release" to the "obscure artfilm", reflecting a preemptive ranking of the titles by the exhibition circuit to cater to a varying appeal with each their own niche audience, progressively, proportionally. Whereas the American distribution system is more rigid, deterministic and binary in nature, by attributing a priori a predefined quantity of screens whether the title is deemed "mainstream" or "non-commercial".
In France, the difference is less pronounced between the "wide releases" (82% of screens) and the "niche releases" (7.2% of screens), only a factor of 7 or 9 between the "less than 100 screens" and "over 650", while in the USA it was a factor of 30 between the "over 3000 screens" and the "less than 100". The share of the total screens available translates in a way that is more fair, and more evenly distributed between each title, domestic or foreign, leaving more screens for the "middle ground" that is neither extremely bankable nor extremely non-commercial.
The "blockbuster" type of release is bi-national (French and American), the "mainstream" type of wide release is multinational (USA, France, Germany, UK), the "niche" type of release is less alienated. Although it features the same types of Hollywoodesque vehicles (such as Germany's co-prod The Three Musketeers 3D, or British co-prod Johnny English), the existence of a share at the wide-release level for popular domestic entertainment (French mainstream entertainment) is a particularity that not every country enjoys.
Like on the USA market, the foreign cinema only get a smaller distribution in France, but its minority share (15% foreign; 1.4% non-EU) is not as invisible as in the USA (8.2% foreign; 0.6% non-English). Only 7 titles get single-digit screens, while in the USA, 28 titles got less than 10 screens. Keep in mind that the 100 screens threshold represents a significantly smaller coverage of the USA territory (wider space, more cities, larger population, more movie-goers), than in France (where it's still a pretty decent distribution for a "small film").


N.B. : Sum of screens may exceed total available screens because each film is counted with its maximum number of screens reached during the month of October 2011.