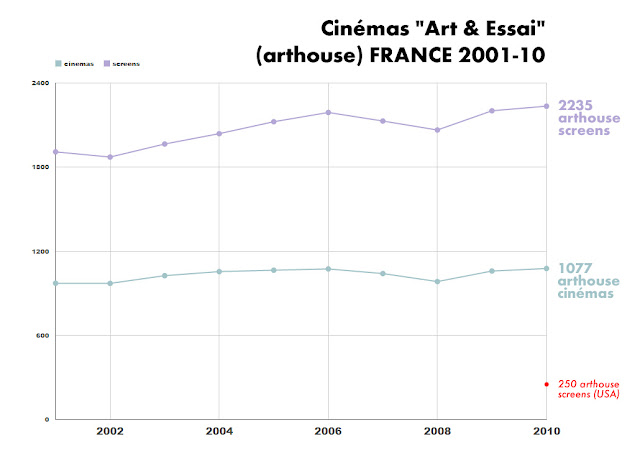 What are arthouses? They are specialized cinemas/screens that consistently show films that are labelled "Art & Essai" by the AFCAE / CNC. 1077 arthouses received this label in 2011 in France, which corresponds to 2235 screens nationwide. They benefit from a financial aid (from the admission price tax) that amounts to nearly 14 Million € collectively.
What are the films labelled "Art & Essai"? They are films reviewed by a college of experts (100 members) representative of the film industry professions, fitting the following set of criteria (defined in 1991, modified in 2002) :

Films projected should either be :


Both French films and foreign films may receive this label, however, the commercial films (with a large audience, a big budget and a huge marketing) tend to be ignored purposefully. The point being to help "small" films to find an audience and stay longer on screens, on a market where they are clearly not competitive enough against the heavy blockbusters turnout. The commission is more permissive/tolerant (quality-wise) for foreign films that have less visibility in France, so it might include films that are considered more "commercial" on their respective market.
Once this benchmark list is established (examples of "art & essai" films here), cinemas that will screen them (for a certain amount of shows per year, in contrast with the other commercial screenings) may get classified "Art & Essai" and receive subsidies, and marketing/distribution aid for these films. Taken into consideration are the diversity of offering, the effort put into cultural animations around screenings (i.e. Ciné Club, conferences, mini-festivals, retrospectives, filmmaker guests...), the quality of the theatre and the equipment, as well as the particular hardship of rural environment, low population, high competition with multiplexes...

Bottom line, the USA cannot fund more arthouse screens than France, in fact they only run 10 times less on a circuit of screens 7 times larger than France (a country 5 times less populated than the USA). This bears repeating until someone realise that there is enough money in the Hollywood film industry (31.8 Billion $ worldwide!) to "spare" a fraction for the preservation/support of a proper artfilm circuit meeting the demand of such a larger demographic. The USA might be the country of the multiplexes and teen flicks... but artfilm-wise they are not at the level the population/moviegoers size requires, it is not even at the level of a European country, in fact it is all the way at the bottom of the world's ranking, next to Iran and India... with countries that have serious issues concerning the underdevelopment of their artfilm circuit. Is this possible??? Why is there NOBODY in the whole USA, for the past 100 years to care about THAT and do something to give the USA its deserved ranking??? Because it is far from it, and film journalists, trade papers, critics, moviegoers, distributors, producers, actors, patrons of the art, philanthropists... there is no one at the moment to take their country in the right direction. The small steps like Redford's Sundance, Ebert's Overlooked Films Festival, indie distributors, or individual exhibitors are a tear drop in the ocean, tiny local actions that remain statistically invisible at a national level. You can do better, you should do better... if you cared.

These are figures I would love to know about the USA market... if they existed.

This "Art & Essai" classification (translated by "arthouse" or "artfilm" in English) is an administrative indicator for professionals, in order to draw the line between films and exhibitors who deserve subsidies for their effort to support the development of film culture, and those who don't. But the spectator/critic doesn't care, nor should they. An "art & essai" film doesn't mean anything, except maybe that we're going to be exposed to "challenging culture" rather than formulaic braindead commercial movies. We can't really use this label to pick a film to watch, it's not enough to know what's in it, who made it, how it was made, where it comes from...


The label is frequently scrutinized and criticized by professionals (who complain for not making the cut) or critics (for too many films being deemed "challenging"), even though, the French definition is stricter than the American understanding of what is an "artfilm" (more on that in the next post). For instance, in 2008 there was a protest movement headed by Pascale Ferran, to champion the overlooked/underfunded category of "middle-budget films", those that are too rich to get a subsidy and too poor to be competitive.
In the USA, the definition of an artfilm is much broader (they think that highly commercial movies such as The King’s Speech; Black Swan; Midnight in Paris; Hanna are "artfilms" just because their budget is inferior to 100 Million $ and that they make less B.O. than their budget... What a commercial definition or "art"!