The UK market, in common with most others around the world, is generally driven by mainstream, US studio-originated material. In such a context, specialised films offer audiences a different experience of cinema. Such films are often characterised by an innovative cinematic style and by an engagement with challenging subject matter. As such, specialised films will challenge and educate audiences of all ages and backgrounds.
The UK Film Council’s definition of ‘specialised’ in this context, therefore, is quite broad and relates to those films that do not sit easily within a mainstream and highly commercial genre. [..] 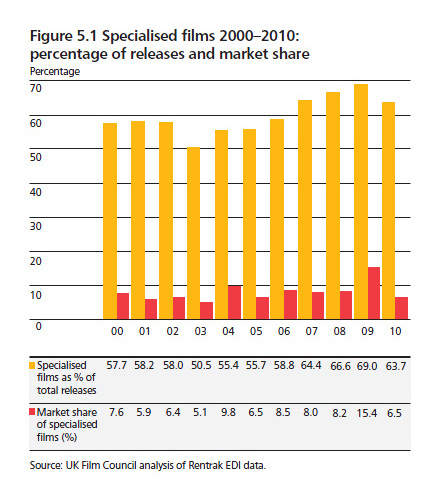 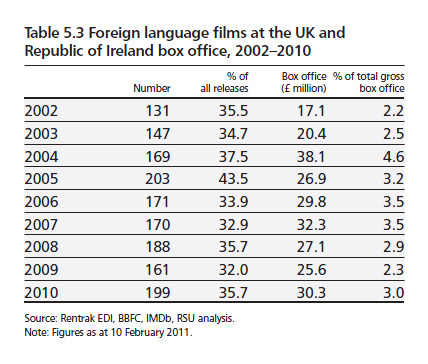 Films in 29 different languages (including English) were released in the UK and Republic of Ireland in 2010, compared with 28 in 2009 (Table 5.2). Hindi was again the top non-English language at the box office, with a 1% share of revenues, followed by French (0.5%) and Swedish (0.4%).
The 28 foreign languages were spread over 199 releases in the UK and Republic of Ireland (36% of all releases, up four percentage points since 2009), earning £30 million at the box office (Table 5.3). This represented 3% of the total UK gross box office for 2010, up from 2% in 2009.
Films in European languages other than English earned 1.6% of the gross box office from 15.6% of releases and South Asian subcontinent languages shared 1.4% of the box office from 14% of releases (Table 5.4). Taken together, foreign language films played on average at only 19 sites at their widest point of release (up from 18 in 2009) compared with an average of 169 for English language releases. 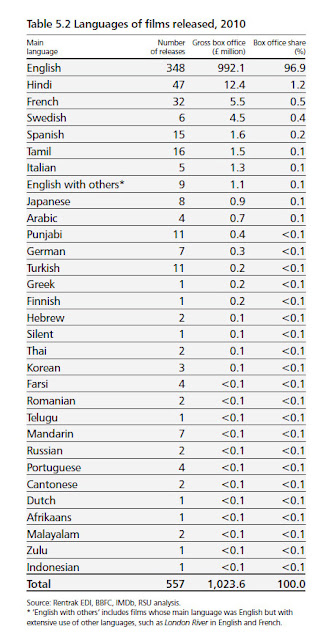 
Rural cinema in this sense means film screenings in rural areas, normally in non-traditional venues such as village and town halls, arts centres and other community spaces. It encompasses film societies, film clubs, mobile cinemas and community cinemas. The UK Film Council allocated £1.2 million of Lottery funding to the Rural Cinema Pilot Scheme to be carried out in three rural areas identified as being particularly underscreened

David Cameron : "Our role, and that of the BFI, should be to support the sector in becoming even more dynamic and entrepreneurial, helping UK producers to make commercially successful pictures that rival the quality and impact of the best international productions.
Just as the British Film Commission has played a crucial role in attracting the biggest and best international studios to produce their films here, so we must incentivise UK producers to chase new markets both here and overseas."
Cameron calls for tighter focus from UK's film industry funding
PM visits Pinewood studios and backs review's call for lottery cash to go to those firms producing films with box office draw (The Guardian; 12 Jan 2012)

Not only in the UK, but readers's suggestions from around the world

"What we seem to like (because we paid for it) is what we get more of. What we don't seem to like (because we're nowhere near a cinema showing it) we can't really want so we won't get more of. It's a good market model, but what bothers me is the extent to which all become culturally complicit in it. [..]
Film is about BO, culture comes extra. The case for 'additionality' has to rely on government largesse (never in very great supply, and even less so now). We've been hearing this for so long it's hard not to be brainwashed into believing that we are a nation of philistines and that culture is a luxury item, to be measured alonside, say, the number of tables turned round annually by your average upmarket restaurant. [..]
The economic logic is impeccable we shouldn't pour money into films that no one wants to see. [..]
Culture is for posh people. Regular folks don't eat culture. but they may safely go to the pictures without fear of contamination.
We've been bombarded with this stuff for so long that we now take it for granted.[..]
That's when I realised I had been brainwashed into believing culture is, by definition, a minority activity, in need of subsidy and indulgence. Something to apologize for, belonging in the world of entreaties rather than demands. [..]
It is, I think, a fairly recent decease as far as film is concerned. In the days of post-war austerity, when British cultural policy first evolved, the cinemas were full. no matter that this was teh heyday of David Lean and Carol Reed, whose 1940s films meet every cultural criterion you could set. cinema made money, so it can't have been cultural. We have lived with the legacy of this - a kind of Manichean view of the arts that links entertainment with commerce, and culture with some higher value - for far too long."
Minority Report (Nick Roddick; Sight and Sound; March 2012)