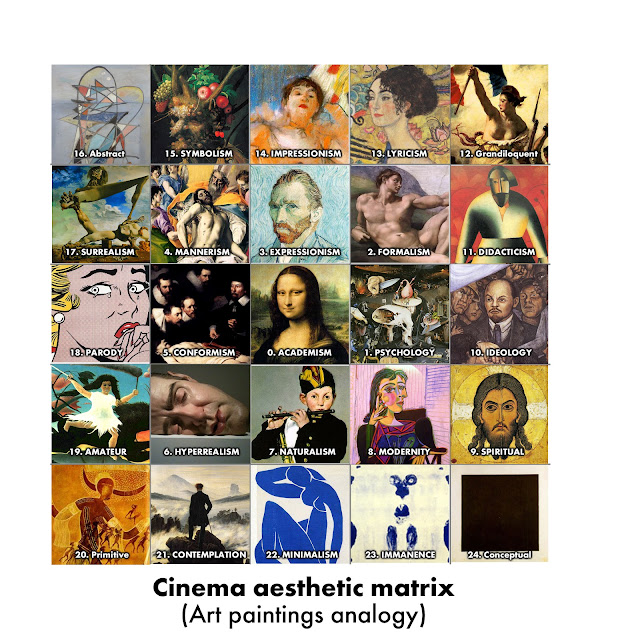 The history of art paintings is much older than the one of cinema, it is often more familiar and intuitive too because the affinities/contrasts/ruptures between art periods, art movements, stylistic schools are defined by rather clear visual differences, at least on an primary intuitive level. That's why it is a helpful visual aid to better grasp the more subtle, complex differences between film styles. A map of plastic styles would not look exactly as this, because the names of aesthetic styles in cinema don't quite overlap the ones in paintings, because the continuity and transition between each "step" work on particular planes : plastic representation and thematics for paintings, and for cinema we have to put into consideration not only the visuals (cinematographic style, lighting style, set style, costume style) but the visuals on the 4th dimension (editing style), the performance style, the dialogue style, the soundscape style (music score style, audio capture style) and the thematics.

The matrix historically initiate on the bottom left corner (Primitive style), but the current standard today is located in the center (Academism).
The matrix expands radially, in a centrifuge way, in all directions at the same time.

Pay attention to the ARTISTIC REPRESENTATION of the human face/body in these paintings, and how it differs from the ones right next to them, and even more from the ones further away. Some go for versimilitude, or strive to attain it at least, others never try to go near it and instead propose a very personal INTERPRETAION of the anthropomorphic representation, more personal, more simplified/stereotypical, or on the contrary a more complexified/transmuted version of a human figure. Same goes with the art of Mise en scène in cinema, and we see the same affinities and contrasts between various branches of cinema history, the realists, the verbose, the minimalists or the abstracts... (to cite only a few of them possibilities discovered by filmmakers over the years).