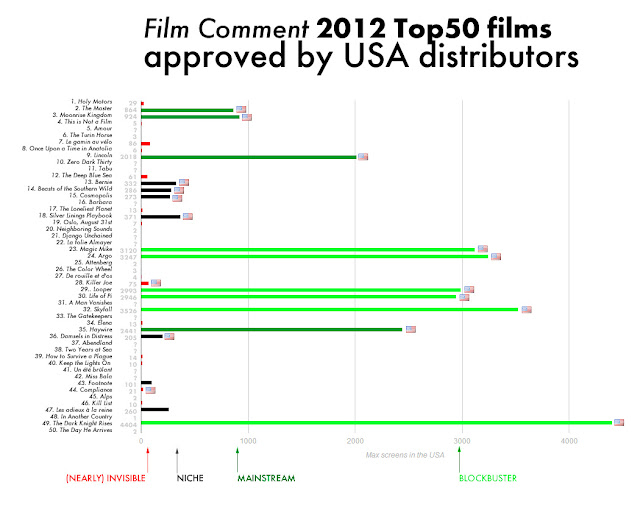 Voting a non-American film at top spot (Holy Motors, France) is one thing, congratulation, but giving it the kind of distribution it deserves would be better, don't you think? Or else, what's the point of saying the BEST FILM OF THE YEAR only get 29 screens nationwide (150 times less than the blockbuster at #49!)? I know, Carax is an odd example, because it is definitely experimental and not for everybody's taste, thus will always get a slim market share. But in France (where it plays home-advantage) it was distributed on 116 max screens nationwide, even though we have 7 times less total available screens than in the USA. I don't think it was the amount of dialogue to be subtitled that made a major obstacle in the USA... And Tree of Life, last year, an equally puzzling experimental film (also at #1 on their list), got 237 screens nationwide in the USA, which is a dire distribution, but not as insulting as for Holy Motors.
Sorry number 1 film of the year, we love you, but it doesn't make us think twice before playing the Year-End Top list mania if your distribution treats you like dirt...

It didn't improve since last year (see their chart for their 2011 Top50), there is also 8 blockbuster on their list, and still rather in the bottom half of the ranking, but what's worse is that gap increased between the plethoric distribution for blockbusters (The Dark Knight gets 11% of all screens available!) while the "niche" section has been entirely coopted by strictly American-made 'indie' films, leaving no room for imports but in the near invsible section. This year, there were a couple of imports above 100 max screens from the UK (The Deep Blue Sea) and France (De rouille et d'os, 659 max screens in France; Les adieux à la reine, 260 max screens in France), even Belgium (with Le gamin au vélo, 34 max screens in Belgium, 234 in France) and barely 1 from Israel (Footnote, 50 max screens in France)! This is dreadful... Do you think they would give a shit? Not really. They are not even aware of it, don't analyse the situation, don't mention it in their introductory text, don't open a serious debate on it, don't start a year-long grassroot campaign to bring back spectators in arthouses... THEY DO NOT GIVE A SHIT.

Film Comment is only another mouthpiece for the Hollywood P.R. You'd think that being an independent institution (a kind of cinémathèque), they wouldn't have to play along the mercantile game of weekly distribution and self-congratulatory acclaim for Hollywood-made products...
Look at their addendum for the "Undistributed Films" (those not deemed profitable enough by American Hollywood distributors)... even the "self-distributed" end up on this list of rejects... because in America, and in Film Comment's mind, being self-distributed in a country that only screens entertainment for profit is not good enough to be included on the "Distributed Films" list! If it's not picked up by an official Hollywood distributor, we'll consider it as lowly as the undistributed ones. That's the mentality of the arthouse institution supposedly independent from the commercial circuit! What a shame.

If it's not Hollywood-made, it doesn't get 100 screens nationwide.
If it's not American-made, it's not distributed at all! Direct-to-Video (if they're lucky)

If there were some cinéphiles, and a couple of critics, in the USA, they would give a shit and do something about it. But there is none. NONE.
America didn't get its coming-of-age eureka moment yet... for their emancipation from the commercial industry. In France, "cinema is an art AND an industry", since 1946 (Malraux). In the USA, in 2012, 66 years later, is still ONLY an industry. Sad but true. Who would dare to dispute this fact??? Never before your cinephile marginal niche goes over the 1% threshold... would you get a chance to dispute it.


N.B. if there is a "?" on the graph, I couldn't find any stats for that film distribution, but don't brace yourself, it probably means it's not on record because its paultry distribution went unoticed. However there are a couple of films due for release at the end of december.