October 17th 1961 : 44 years ago today, before I was born, the french police, under the command of infamous officer Maurice Papon, beat up and pushed into the river the pro-Algeria-independance FLN protesters, with women and children, under the presidency of General De Gaulle. 200 activists died. The french press overlooked the tragedy. The OAS terrorist bomb attacks continued. Nonetheless the independance was signed on july the 3rd 1962.

Earlier this week, the senate voted a law to promote the "good sides" of the french colonialism to the dismay of the french-algerian community...
Note: A fiction documenting this protest is released on October 19th 2005 : Nuit noire 17 octobre 1961 (2005/Alain Tasma/France), I haven't seen it yet.

This is the event reported in the film: 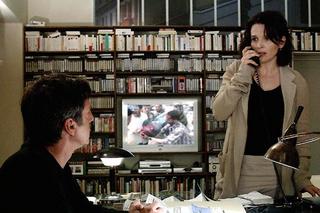 Apparently Haneke sent out a note to all french critics begging not to reveal end spoilers. Interesting to see how conservative he is with the plot suspense, like any single-serving end-twister in Hollywood, as he's precisely working on the mechanism of genre manipulation to make the audience aware of the fallacies. Images have the power to influence the mind, says he, like the fascist propaganda, and the audience ought to be educated to be wary.
He shows every year the movie Air Force One to his film students, because it's the archetype of conscious american imperialist propaganda.

Reference to TV industry methods : the editing work of the literary talk show in the film (by Daniel Auteuil), cliping out the boring arts and going straight to the juicy bits, as Haneke learnt in his 20 years long TV director career. Relationship between the audience and the TV reality, like in Benny's Video and Funny Games. (Same obsession Atom Egoyan has with video and TV screens).
Opposition of fixed plans and plan-sequences, either to emphasize the self-consciousness of a voyeur-cameraman, or the unedited drama of a tensed relationship between 2 characters.

Cinema HD : specific texture suited for the ambivalence wanted by the film, so we cannot tell whether the scene is live or from a video tape. The widescreen format was picked to mimic the 16/9 TV screen seen in the film. Likewise he used an academic format for Benny's Video to be able to fit a TV set full screen and play on the fiction/reality ambiguity. But to work with HD was dreadful, he said, the lenses, focus, depth of field, light... the cameras aren't good enough yet to replace film. Thanksfully he doesn't plan to switch to HD like many auteurs did lately. Haneke checks every shot on the combo monitor because the acting performance is more powerful emotionaly when experienced live on set. The camera frame doesn't record the magnetic physical presence that seriously biases the witness' perception., so he must take this missing element when appreciating teh success of a scene, coldly watched on a TV screen.

La Pianiste / The Piano Teacher was written 10 years ago for another director, a friend of his who couldn't find a producer, Haneke hadn't planned to adapt it for the cinema himself. Le Temps du Loup / Time of the Wolf was written right after The 7th Continent. Both old work, clashing with his austrian films period.

Haneke, great melomane, will make Don Giovanni at the Opéra Garnier in Paris in january 2006, a real opera, not a film, after 20 years directing theatre.

Next project, a 3h long film in german, on the danger of childhood education dealing with the nazi generation, 1914-1939.

I knew about Time of the Wolf being from an older period screenplay, but I didn't realize that The Piano Teacher was too. That makes complete sense now, thanks. I was wondering why Haneke did such a radically different turn after Code Inconnu, especially since this one was most explicitly aberrant psychology and alienation, something more in line with Benny's Video or Seventh Continent.

The voyeur-cameraman comment is particularly evident in this film, which is why the film seemed to me as almost converging in Harun Farocki's territory of the pervasiveness of surveillance. We know that the cameras are there, and we alter the way we conduct our lives because of this awareness. It doesn't reach the level of paranoid guilt that Georges succumbs to, but we still feel that self-consciousness because of the possibility that we are being filmed.

These are the 2 films I skipped, althought the reason was my disappointment with Code Inconnu (I think you like this one the most though, I obviously need a rewatch and catching up on the skipped ones too).
The 7th Continent and 71 fragment are rare in theatre and I'm dying to see them for a long time now.

Yeah this film is a perfect addition to the retrospective on surveillance I'm following this autumn.

Actually, speaking of the filming conditions on the set, he mentionned the visit to Majid scene, appearing twice, is shot a few inches apart each time, as if to point out one is the eye of the camera, the other the eye of the voyeur (maybe). This guy is insane... who is going to notice such things? ;)