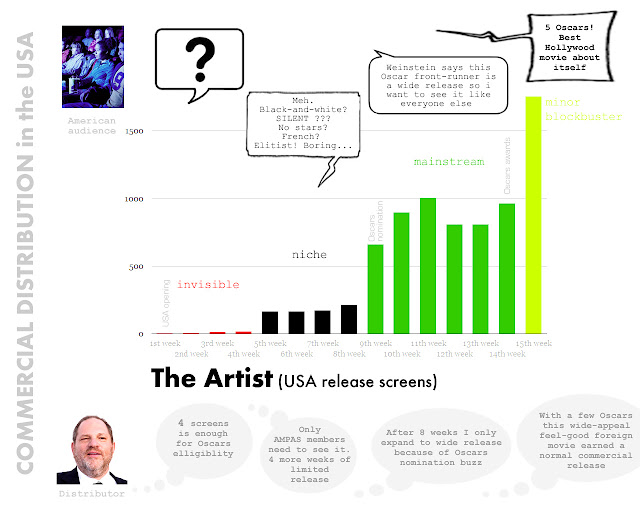 If Harvey Weinstein knew The Artist was (1) a good movie, (2) a potential Oscar winner, (3) a crowd-pleaser why did he wait almost 4 months to give it more than 1000 screens (which is the lower level of a typical "wide release" on the USA market for a commercial movie)??? I know, being silent AND foreign hardly makes it a totally universal crowd-pleaser... it's already amazing such a film gets a commercial distribution at all on USA soil, outside of a couple of repertoire house (which is what would happen to a contemporary silent - gangster genre - film like Kaurismaki's Juha). but once you've overcame these lazy resistances (the latter being almost imperceptible since all the intertitles are seemlessly translated in English, it could very well be an American movie for all that matters) the movie is a typical genre, and/or a pastiche of a genre, a musical, a romance, a comedy, about Hollywood history... what is there that the American audience couldn't connect with? In retrospect, it looks quite shy, or rather cowardly, to open such a box office winner  (not of major-studio-blockbuster proportion of course) on only 4 screens for its American première.

If an easy movie like The Artist doesn't make American distributors feel confident enough to give it a decent distribution equivalent to its Hollywood production counterparts... then what will? Do you really need to get to this exceptional situation (to win Oscars, Golden Globes, Spirits, SAG...) to get the normal exposition that any other Hollywood movie gets automatically whether they are good or bad? Couldn't you lower this unattainable bar that one foreign film in 50 years may reach to get the chance privilege of a "normal commercial distribution"? Can't you just put faith into international purchases and invest/risk your money on foreign films deserving to meet a wider American audience because there is nothing wrong with them (except for the fact they are not in ENGLISH).
If the average Hollywood flick would have to wait till they get 5 Oscars to get distributed on wide-release... there would be a lot more room on American screens. See what am sayin'?

And if a FOREIGN SILENT FILM can ultimately appeal to the mainstream American audience, why a more comformist mainstream genre movie (i.e. NOT silent), like A Separation, Poetry, Melancholia, Mysteries of Lisbon, La piel que habito, City of Life and Death, Carancho, Le garçon au vélo, Habemus Papam... could not become popular amongst American moviegoers, therefore being treated like a "commercial release" for Hollywood movies and get a decent number of screens on opening weekend? Let alone world-class artfilms (that might have a more challenging form to access for the average moviegoer)!

Why is the American market so fucking skimpy and reluctant to foreign cinema??? What a lame, insular industry.