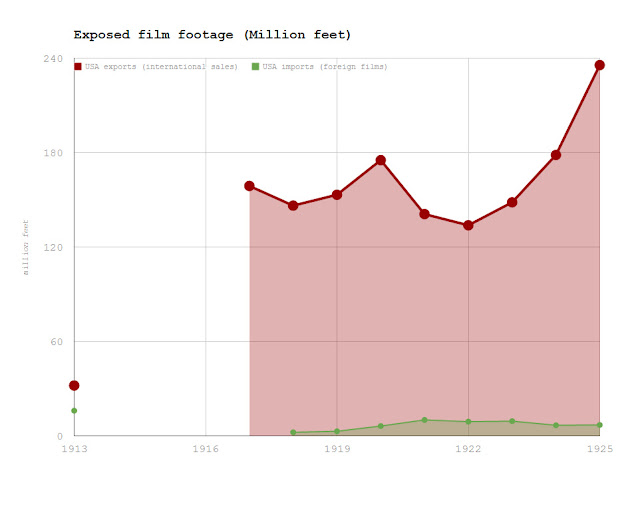 
There is a gap in data between 1913 and 1917, but we get an idea of how was the import-export balance before and after World War 1. It's not counted in number of films or in spectators, but in exposed film (negative and positive) footage, so we can assume it's the available number of hours for American films outside the USA (USA exports) and the number of hours of foreign films available on the American market, regardless for the runtime of each title (which varied a lot back then). What is evident is that the American film culture was just as insular back then than it is today. Remember that back then, in the late Silent Cinema era, most films were commercial and narrative by nature. What was later called an "art cinema" category, like Chaplin, Keaton, Griffith, Lubitsch, Flaherty, Stroheim, Walsh, Vidor... (for the USA) and Feuillade, Perret,  Clair, Tourneur, Wiene, Dreyer,  Bauer, Eisenstein, Murnau... (for the rest of the world) were all popular genre widely commercially released in their respective countries. So the USA market didn't release foreign films because they were "non-commercial" or appealing only to a niche audience... they just embargoed the great masters of the commercial silent genres for selfish reasons only, to boost the box office of their domestic productions! And we know that this mentality and practice didn't move an inch for the consecutive 90 years...
If there was an operative film criticism back then, and now, certainly some people (at least a minority of alternative press) must have taken some measures (with governmental aid or not) to defend a larger import of the cinema culture coming from abroad... Unfortunately, this kind of culturally-conscious journalism didn't exist then, and still doesn't exist today in the USA... because the level of cinema imports is still under 10 %. Hollywood never gets tired of getting richer than any other film industry/film market in the world, and continues to maintain a totalitarian grip on protectionism like a brand new struggling industry attacked by more powerful competitors would. I don't know why anyone smart enough to hold a pen would think that Hollywood is threatened by foreign competition... but apparently there isn't a single American film magazine who believes that this anti-foreign-cinema glass ceiling should be denounced (at the very least) and firmly opposed (at best) until the import-export discrepancy becomes more reasonable (20-80%).
Making one headline per year about it, without following through and see if the situation evolves... and just doing the same the next year, as if they never talked about it before, as if it wasn't like that for the past 100 years without improvements... is not enough. After a century of unsuccessful "headlines", maybe American critics should start thinking about taking more efficient actions... but that would assume they know what is going on, and what is there to do. which they clearly don't, indulging year after year into redundant, shallow Oscar coverage, and ignoring the fact the best films are released on less than 10 screens nationwide. All this is normal to them. They've been numb by the Hollywood P.R. and are too happy to watch entertainment for free to risk to lose their perks.
Oblivious, ignorant, incapable and cowards. They might think it is a bit harsh, poor little things... but after 100 years of uselessness, I believe it is fair for the world to feel impatience, frustration and resentment, and start calling things as they are. The nice way didn't work until now... maybe we should consider an embargo of Hollywood products (since they rely so much on their international sales to avoid bankruptcy), even the good flicks, only then would they get a taste of their own medicine and feel what it's like to be denied exports on major markets and forced to make do with your domestic audience.


Let's see if they can manage to build a decent specialized film press before the next 100 years... (I'm not too hopeful though). Their current concern is to figure whether the Oscars are a ceremony relevant to world cinema! We are in 2012 and they didn't stop expecting, 50 years ago, for an industry-centric award spectacle to have canonical relevance outside of their borders... Don't forget to ask yourself again next year if the Oscars is relevant internationally! We never know, the rules changes might turn its foundations upside down... Hopeless.