France is the 2nd largest exporter of national cinema in the world (with 2 or 3% of the global market share = 60 Million admissions = 0.42 Billion $) behind the USA (21.2 Billion $). Notice the huge discrepancy between the leader and the first runner-up.

The American cinema industry was built early on with a powerful commercial format, formulaic film genres and the star system, and the commercial trade was patterned after big international corporations such as Boeing.

The French model of domestic distribution is quasi-unique, where multiplex screen artfilms alongside mainstream entertainment, the arthouse circuit is well developed in most major cities, supported by subsidies and by a loyal audience. To the point where commercial multiplexes (in Paris notably) that sell the largest number of artfilm admissions in Europe, complain about the unfair competition that state subsidies introduce on the market of such artfilms (since aid only goes to small independent exhibitors and not to multiplex brandname  franchises... (the art & essai label that guarantees subsidies is a complicated business in France!)

Whereas the USA only has a weak arthouse circuit to rely on for artfilm distribution (and now shifted almost entirely to DVD distribution instead of hoping for a theatrical circulation).
Meanwhile in most countries, the option of an arthouse circuit doesn't even exist today as an alternative circuit, and never even existed in the first place, which explains the domination of Hollywood imports on their screens. Multiplexes often built with American investments (like the campaign in China to bypass the restrictive import quotas, they co-finance multiplexes and studios to appropriate from the inside a share of the "domestic" share).


Certain foreign films make their best box office in France, higher than the admissions they sell on their domestic market! Some even get only released in France, while they are banned or censored in their own country.

Basically, French cinema and by extension European cinema is essentially screened and viewed in arthouses, while the multiplexes (except in Paris) mainly show Hollywood blockbusters, like everywhere else in the world. That's why the development of multiplexes in suburban areas has considerably damaged the survival of the downtown arthouses.
In Germany, 20 cities lost their last arthouse in recent years. In Italy over 300 arthouses have been shut down in 3 years.

On 25 million admissions sold on the USA market by French cinema, 20 million come from English-spoken film productions made-in-France (by EuropaCorp), such as Taken or The Ghost Writer, fabricated according to the Hollywood formula. Which is telling about the American audience, the French films they prefer are the ones shot in English, with American actors, which plot structure resembles the Hollywood format... Open-mindedness towards World culture and cinema diversity fail!
The usual market share French cinema (in French language, with French actors) could expect on the USA exhibition circuit is between 6 and 8 million admissions.

In the Cannes line-up, 50% of the films selected are either French, or co-produced by French investments. Among the foreign films selected by the Oscars, the films representing Finland (Le Havre), Lebanon (Where do we go now?); Morocco (Omar m'a tuer) are French co-productions that wouldn't exist without the aid of France, like for Lou Ye (China) or Brillante Mendoza (The Philippines). At TIFF this year, 35 French productions, 55 French co-productions out of 300. This is the richness and cultural diversity of the French system, "terre d'accueil" for foreign artists.

Last year, the score for French productions in the USA lowered considerably because of the absence of the Hollywood-lookalike such as Taken, but the French spoken films gained 20%, and the number of titles was larger too.

For instance certain French films fare much better abroad, like Coco Chanel & Igor Stravinski which killed in Japan, or Ne te retourne pas thanks to the popularity of Sophie Marceau in China (300000 spectators!), Persepolis made 1870000 spectators abroad (1.2 million in France), Le Fils de l'épicier  (debut without stars) thanks to Germany, Spain and Australia. Entre les murs (Palme d'Or) made 2.4 million admissions, of which 600000 in the USA (1.6 million at home). L'heure d'été made 690000 admissions (420000 at home). Amélie = 23 million admissions. Coco avant Chanel = 5 million.

2 factors influence greatly the success of French films abroad, for their distribution and their popularity with the (cinéphile) audience : the selection and awards in Cannes and the Oscars.

Rendez-vous with French Cinema : junket for French films exports. 120 journalists, from 30 European countries (+ Canada), are invited all expenses paid for 4 days to interview stars (916 interviews made last year for TV, press, internet and radio), plus about 250-320 European distributors (+ Kazakhstan, Vietnam), to discover 40 some undistributed French films in exclusivity. Same with American journalists, and Australian journalists on other dates.

One difficulty French cinema promotion faces is that unlike the Hollywood system (where stars are contractually obligated to promote the film worldwide, in junkets, at festivals, at premiere screenings) facilitated by a simultaneous release in all countries in a very short period of time, French films international distribution might take 2 years, and stars can't be available for junkets and promotions for such a long period of time because of schedule conflicts and ongoing shootings.

uniFrance organises French-only mini-festivals in New York city, Tokyo, Rio de Janeiro (+22 Brazilian cities), China, Russia, India, Australia... (like "Rendez-vous with French Cinema") which do a lot for the promotion of French cinema abroad, and might explain how France is number 2 in cinema exports in the world. (Although these titles are usually the mainstream blockbusters of the French market, and only give a mainstream stereotype of what might be French cinema...)

The USA market is the largest in the world, unfortunately a number of specialty divisions have shut down, the auteur-cinema is not a priority on the American market. The number of titles and the number of admissions is stable for French films in the USA... however the turnover is much quicker, and the opening weekend screens are always fewer. Which is a global phenomenon throughout the world within the commercial distribution.
American niche audience (French-friendly), mainly students or the older generation, prefer Assayas, Desplechin, Audiard, Claire Denis, Akerman, Audrey Tautou, Catherine Deneuve...

Europa Cinema (MEDIA) is a European fund granting subsidies to exhibitors in the world that screen at least 25% of European films.

VOD might be the only alternative to niche distribution for remote locale where screenings are not profitable. Like IFC on Demand. uniFrance created an online festival for this purpose.
Netflix = 23 million subscribers (USA+Canada),  there only propose 2 French film titles in their collection !

The Russian audience prefers French comedies. Japanese audience has a cinephile tendency like the USA, they prefer Luxury theme (Coco Chanel), Woman, Environment, Desplechin, Dumont... 2 arthouses in Tokyo screen almost exclusively French films. In China, only 4 French films per year are released (due to the import quotas imposed by the government). 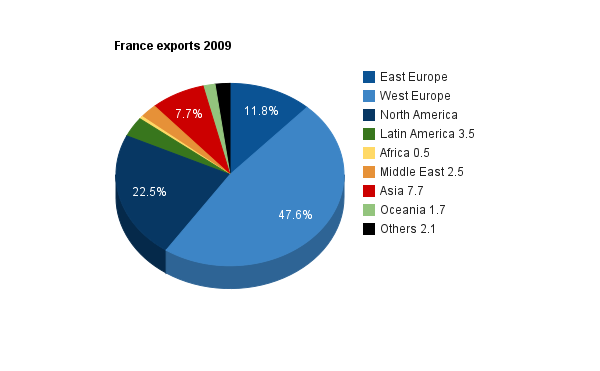